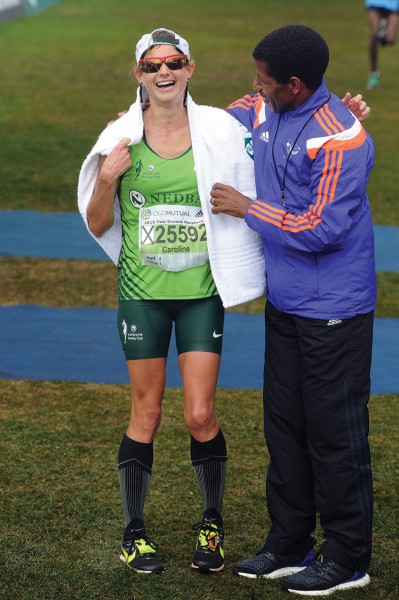 A year ago many of us had never even heard of Caroline Wöstmann, but after finishing first South African woman at the 2014 Comrades and winning the 2015 Old Mutual Two Oceans Marathon, she has become one of the most talked about female ultra-marathoners in SA!

When Caroline Wöstmann came home sixth in 6:51:43 in the 2014 Comrades Marathon, many South African runners and fans of the sport could have been forgiven for asking, “Who?” She was relatively unknown, having run just three Comrades before, with a best time of 7:16:48 to finish 15th in 2012. Before that, in her two previous Comrades runs, she had finished in 9:17:39 in 2009 and 8:33:29 in 2011, so she was an outside bet at best when the pundits discussed their favourites for the top 10 gold medal positions for 2014. Her only run at the Two Oceans Marathon, in 2013, had seen her finish 83rd in 4:54:42, so that also did not point to her making such a breakthrough in the 2014 Comrades, but that’s what she did, seemingly quite comfortably, too.

Now however, after her spectacular win in the recent 2015 Two Oceans, her name is on everybody’s lips in running circles, because she stormed through the field to claim the women’s title in 3:41:24, passing second-placed Tanith Maxwell on Southern Cross Drive and then storming past defending champion Nina Podnebesnova of Russia with less than 5km to go. As she took the lead, the 32-year-old broke into a huge smile, which one commentator described as almost unbelieving, and it stayed on her face right to the finish as she became the first South African woman to win the race in 14 years.

Unsurprisingly, the winner’s tape had barely hit the ground and the pundits were talking about her chances of winning the Comrades at the end of May: Will her legs recover in time, does she have the speed and endurance to win it, and more. Caroline herself is upbeat about it all, saying that she has faith in her coach, Lindsey Parry of the University of Pretoria’s High Performance Centre, to see her through to Comrades. He has been coaching her since September, and Caroline says he has helped change her outlook completely, resulting in one personal best after another, including a 2:44:57 marathon in Port Elizabeth in December.

“He said I should aim for 3:50 at Oceans, and I said no, that is too hard, so I don’t know how it happened that I ran 3:41. They say that a good Two Oceans blows your Comrades, but I’m sure Lindsey will know what to do, and he thinks my legs will be fine for Comrades. My main aim is to enjoy it – I simply can’t imagine how anybody could run that far without actually enjoying it. It’s supposed to be about enjoying the journey, not just about the destination, and there are so many people to chat to along the way, crowds to enjoy, beautiful views to take in. That’s why I run the Comrades.”

Caroline was born in Johannesburg and lived in Midrand most of her life, but now lives in Pretoria, where her husband Haiko works, and she commutes to work in Johannesburg. She studied at the University of Pretoria to become a chartered accountant, then worked for Deloitte for a few years as an audit manager before accepting a post lecturing management accounting and finance at Wits. The couple have two kids, Gabriella (7) and Isabell (4), and Caroline says Haiko does a bit of running and often comes with her to races, where he sometimes does the 5km fun runs with the kids, but mountain biking is more his strength.

It was actually having kids that got Caroline motivated to run. “About a year after Gabby was born, I hadn’t managed to lose my pregnancy weight, so I decide to try running. My sister Christine started with me late in 2008, as she was staying with me at the time while doing Matric, and we would run around an 800m block in our suburb, but she would wait for me at the top of one hill, as I was that bad back then! But after a couple of months of running, instead of feeling terrible, I started feeling good, so my New Year’s Resolution was deciding to run the 2009 Comrades! Everyone thought I was mad, but I was determined.”

Caroline ran her first race at the end of October 2008, joined Midrand Striders and then moved onto the DisChem Half Marathon in January 2009, but that didn’t quite go to plan. “Christine and I missed the start after getting stuck in traffic and struggling to find parking, so we ended up starting with the 10km or 5km athletes, but we still loved it, and did about 2 hours 30 minutes.” A month later she did her first 42km at the Pick n Pay Marathon, clocking a respectable 3:52. “I now look at it as a terrible finishing time, but my clubmates were all wow at the time.”

That saw her qualify for the 2009 Comrades, but she says her first Big C was really tough. “At 70km I was crying on the side of the road. My hubby had driven along the route with Gabby and stopped at three or four points to support me, and I told him I couldn’t go on, but he said I can do it and kept me going. He wasn’t going to let me quit after all the effort to get there, and I got my bronze in 9:17:39. I missed the 2010 race due to being pregnant with Isabell, but was back to earn a Bill Rowan in 2011, then a silver in 2012. In 2013 I got a bit overambitious and wanted a gold medal, so I overtrained and landed up with a stress fracture. But then came 2014 and I got my gold.”

“I didn’t expect to be the first South African woman that year, because I had joined the Nedbank club and had been training with Charne Bosman. I fully expected her to be first, but I felt confident of getting a top-10. I was actually surprised that nobody else believed it. Afterwards people said I was smiling the whole way, looking so comfortable, but I actually struggled a bit in that Comrades, due to a minor injury picked up five weeks before the race. I was actually a bit worried throughout and don’t think I was smiling that much, and the last 10km was really hanging in there.”

Moving into 2015, Caroline says the recent Two Oceans was the best race of her life, and from beginning to end she just felt great. “The crowd support was so amazing, and I used it to fuel my running. I was thanking people for their support, so got still more support, and when I moved into third, the guy on the bike next to me even said wow, what incredible support.” However, Caroline says that passing Tanith to take second place was a bittersweet moment: “I am actually a big fan of hers, and wanted to see what she would do in her first ultra, so I actually felt a bit overwhelmed passing her. I wanted to say you’re such a legend, but at the same time didn’t want to say too much, so I just said hi. She was probably a bit more conservative, as she was going into unknown territory beyond the marathon mark, but I saw footage of her coming home and she looked so strong, so I definitely think she can go faster in future.”

As for her own future plans, Caroline says her ultimate goal is to win the Comrades: “I don’t know if I’m capable of winning it yet, because there are such great athletes that come out to run it, and I don’t know if I’m at their level yet. So I’m not going to go for the win this year, I will go for a specific time. But then I never would have dreamed I could win Two Oceans – I didn’t think I was fast enough, let alone able to run under four minutes per kay for 56km. My strength has always been going far, not fast, and I was stuck with the speed thing for a while, hence I approached Lindsay to coach me, and since adopting a targeted approach to speedwork, I have seen a huge improvement. But still, I think I was more surprised than anyone else about winning Oceans!”