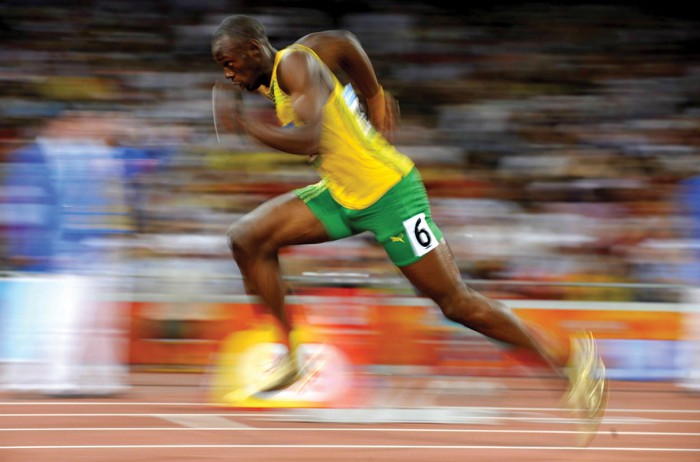 It’s not every day you get to meet the world’s fastest man, so when Puma invited me to New York for the launch of their new Ignite running shoe and the chance to interview multiple world record holder, Olympic and World Champion, Usain Bolt, I had my passport out in a flash!

Jamaican sprinting superstar Usain Bolt is one of the most recognised sports icons in the world, as famous for his dominant wins in all the major meets as he is for the ‘Lightning Bolt’ pose that follows. He is the first man to hold both the 100m and 200m world records (9.58s and 19.19s) since automatic time measurement became mandatory in 1977, and also holds the 4x100m relay world record (45.28s) along with his Jamaican teammates. He is the reigning Olympic champion in all three events, the first man to win six Olympic golds in sprinting, the first man to do the ‘Double Double’ of 100m and 200m titles at consecutive Olympics (and the first to do the ‘Double Triple’ with the relay thrown in), and is an eight-time World Champion.

And yet, in spite of all the medals, records, endorsements, awards and media limelight, he is an approachable, down to earth guy who is clearly very focused on his athletics career, and I was blown away by the great man’s candid honesty and terrific sense of humour. Here’s what he had to say.

MA: Your 2014 season was hampered by a hamstring injury that eventually required surgery. How are you feeling now?
USAIN: Last season I felt the pain all the time, but didn’t pay it much mind – I just thought it was normal track and field pain. But then it became a problem. The surgery went fine and it’s all good, so now it’s important for me to stay injury-free this season and go into next season on the front foot for Rio. The competition should be good this season, especially the World Champs in Beijing later this year, so I am looking forward to it.

MA: If you win a gold medal in Rio, you’d be the first man to win three Olympic titles in a row…
USAIN: I will win in Rio! I live for competition, and it means a lot to beat the best in this sport.

MA: Do you reckon you can go faster than 9.58?
USAIN: My motto in life is that anything is possible, so it’s all about getting into the best shape. And you’d be surprised to hear what my coach says. I remember the first time I ran a world record, here in New York, and I thought that was the perfect race, but he said no. Then I ran another great race in Berlin and he said I slowed down again just before the line. I think coaches see things differently, the little things that can be adjusted to improve still further, and every time I run a fast race he still finds something to say about it. I remember at the London Olympics, I said I want to get a good start, and he said ‘Listen, stop worrying about the start, because you’re not a good starter – you’ve only ever had one good start in your career – so just go out there and you’ll be alright.’ That actually put my mind at ease.

MA: Is there anything you are doing differently as you get older?
USAIN: I just tweak things here and there, because as they say, if nothing’s broke, don’t fix it. One thing I have changed, though, is my diet – a lot more vegetables, and I’ve backed off the fast food, which I used to eat late at night. Now if I’m hungry, I eat fruits, which is just weird! But that’s what coach says, and it works, so it’s alright.

MA: Having won everything, is motivation an issue for you these days?
USAIN: I have discussed it with my coach, and one of the things he has pointed out to me is protecting my legacy in the sport, because it just takes one championship to go wrong for people to start writing, ‘oh, maybe he’s not so good.’

MA: It seems unthinkable to picture Usain Bolt at 33, still competing and starting to get beaten, so do you see yourself going out at the top, perhaps with another three medals at Rio 2016?
USAIN: That was the initial plan, to go out after Rio, but my sponsors have asked me to do one more year beyond Rio, to go to the 2017 World Champs in London, but I’ll just be doing one event then, focusing on the 100m.

MA: And after that?
USAIN: I was really thinking about football, but I did a photo shoot recently in Europe and we were wearing shorts, socks, normal football kit, and it wasn’t even snowing, but it was so cold. I thought to myself, I can’t do this, because this cold is ridiculous! Also, I had always wanted to play for Sir Alex Ferguson at Manchester United, but now he’s retired, so it’s looking doubtful.

MA: Puma is now sponsoring Arsenal, so if you were offered a few hundred thousand pounds a week to play for them, would you do it?
USAIN: No, I could not play for Arsenal ever! I actually knew before they announced it that Puma was going to sign Arsenal, so I said ‘Bosses, let’s talk about this. I’m not going to do any shoots with Arsenal kit on, and don’t even send me the gear, because I don’t need it!

MA: You’re known for your showmanship and clowning around as much as for your speed…
USAIN: I have always tried to be a funny person and I think that’s what makes people enjoy watching me compete. I bring a lot of energy, and I think people want to see your personality, so I try to have fun and make people laugh. Also, I’ve learnt over the years that if you think too much about your race, the only thing you do is make yourself more nervous… so I try to enjoy the moment as much as I can. And then when it’s time to get into the blocks, there’s no time to get nervous, you just get on with it.

MA: What inspired your Lightning Bolt celebration?
USAIN: It just happened, really. It was a dance in Jamaica called To the World, and I just put my own spin on it and made it my own. It was one of those moments, like when Michael Jordan dunked in basketball and that became his pose forever, and it works for me.