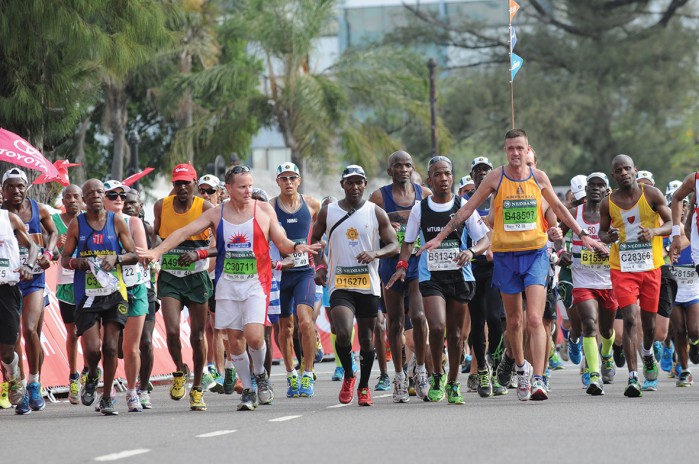 The Modern Athlete Pacesetting Buses for the 2015 Comrades Marathon should be the biggest and best ever, thanks to the stellar crew of bus drivers and conductors being assembled, and with more buses than ever before, notably in that massively important last hour of the race when more than half the field comes home. Here are the pacers to look out for on 31 May.

Vlam Pieterse
23 Medals
Club: Hartbeespoort Marathon Club
Vlam is a pacesetting legend, having finished in the last 15 minutes of the race 18 times, both as an official and unofficial pacesetter, so he knows a thing or two about getting to the finish in time to beat the final cut-off. “Driving the sub-12:00 bus is really living life on the edge – great if you make it, heartbreaking if you don’t – and I have learnt to remember that I am a pacesetter, not a nurse, so I must stick to my pacing chart to ensure that everyone in the bus gets to the finish on time, I cannot slow down or stop for anybody who can’t keep up, even though it breaks my heart to see them drop off the bus,” says Vlam.
Last three Comrades: 2014 – 11:53:40, 2013 – 11:58:13, 2010 – 11:50:28

Derrick Rondganger
7 Medals
Club: Telkom Athletics Club
Another veteran of pacesetting, having brought home many get-you-round buses in Cape races as well as the sub-12:00 Comrades bus, Derrick got into pacing four years ago when he was asked to lead a sub-12:00 bus for a group of friends who had lost their regular ‘driver’ due to a pre-race injury. “I fell in love with pacesetting in that race, and I particularly love pacing the last group home, because I think it means the most to them,” says Derrick. “Also, pacing with Vlam is an honour – he is a legend and I am still learning from him, but I think we compliment each other well.”
Last three Comrades: 2014 – 11:53:40, 2013 – 11:56:50, 2012 – 11:38:17

Wietsche Van Der Westhuizen
37 Medals
Club: Bellville Athletic Club
As one of the most experienced Comrades runners, Wietsche also knows a thing or two about pacing. Some years back he twice led the sub-9:00 bus home, and has also done sub-6:00 and sub-6:30 buses at Two Oceans, most notably the fun sub-6:30 Pink Drive bus in this year’s Oceans. He even donned a pink bra! “Besides running for a target time, we’re running for a cause, so I’ll be running Comrades with my pink bra again. I believe running is a sport you must enjoy – and if you’re not having fun, you should go play bowls!” he says. “My aim is to make sure everybody gets to the end and enjoys it – they will have pain, but they’ll want to come back next year.”
Last three Comrades: 2014 – 11:46:15, 2013 – 11:37:45, 2012 – 9:24:20

Hilton Murray
11 Medals
Club: Bellville Athletic Club
Having shot to fame as the man in the penguin cap who did 10 Comrades back-to-back last year, running 89km per day for nine days and then the Comrades itself on the 10th day, Hilton has now turned his running talents to bus conducting. At the 2015 Two Oceans he joined clubmate Wietsche van der Westhuizen in leading the sub-6:30 Pink Drive bus, and says, “At Comades, we’re going to turn our bus into the first ever Pink-legal-abnormal-overload-human&apenguin&achicken-bus on the N3 from Durban to Pietermaritzburg, a road notorious for overloaded runaway buses, but seldom pink! Standing room unlimited on this bus!”
Last three Comrades: 2014 – 11:46:14, 2013 – 10:45:48, 2012 – 9:42:38

Jackie Campher
13 Medals
Club: Lewensentrum Athletic Club
Jackie was one of the first volunteers when Modern Athlete ran its first Comrades buses in 2011, and he successfully brought home three consecutive sub-11:00 buses to great praise from the runners around him. “I enjoy leading buses and helping other runners achieve their goals in races, whether it is a sub-11:00 or qualifier of five hours, or even a sub-4:00 marathon, which they might have tried but could never do. I am flattered that there have been runners asking on Facebook if I am taking the 11-hour bus again this year – these are people I met while leading buses in races, and I am proud to be able to help them.”
Last three Comrades: 2014 – 9:45:52, 2013 – 10:56:42, 2012 – 10:51:33

Buks Van Heerden
15 Medals
Club: Nedbank Running Club Vanderbijlpark
Buks also goes into this year’s Comrades with a large following, thanks to the fact that he has paced in a whole series of races in the Gauteng area in the build-up to the Comrades, and built up quite a fan club along the way. “For me it is the feeling of taking people through and seeing their happiness when they make it. Being a pacesetter has taught me that there is more to running than winning. It’s about helping people to achieve something that they may not believe they can do, or are not sure they can get there. I know that these buses make a big difference in people’s lives.”
Last three Comrades: 2014 – 8:46:08, 2013 – 9:54:57, 2010 – 10:07:54

Jeff Ramokoka
16 medals
Club: Eskom Athletic Club CGA
Last year Jeff volunteered at the last minute to lead the hitherto driverless sub-11:00 bus, and he soon had a massive following out on the route. The photos of the bus tell the story, with Jeff out front conducting a singing, dancing throng of runners down the road, with an awesome vibe that carried them all the way to the finish. No surprises that a number of his passengers wanted their photo taken with him at the finish! Chances are his bus will go a little bit faster than the other one led by Jackie and Buks, thus giving runners more than one option as they chase their bronze medals.
Last three Comrades: 2014 – 10:42:15, 2013 – 9:12:15, 2010 – 9:18:22

Johan Van Tonder
12 Medals
Club: Alberton Amateur Athletic Club
Johan is one of the country’s most experienced Comrades pacers, having carried his first sub-9:00 flag as far back as 2003, and done so most years since. Even in the years when things did not go well for him – as can so easily happen in a 90km ultra – he dropped back and joined one of the slower buses, sometimes even bringing that bus home when its driver experienced problems along the way. “I love my pacesetting so much, because seeing people reach their goals reminds me of the promises I made to my family to help others whenever I can. I love giving back to the sport, and will keep pacing for as long as I can.”
Last three Comrades: 2014 – 8:56:00, 2013 – 9:07:07, 2012 – 11:57:10