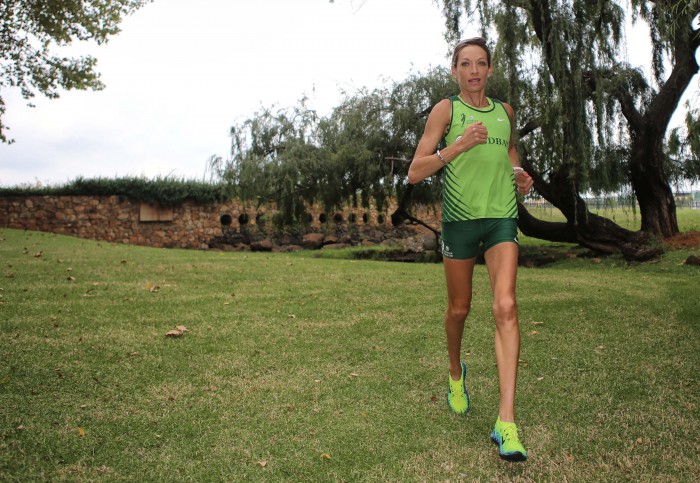 When Charné Bosman (Nedbank) runs the Two Oceans ultra-race in Cape Town on Saturday, she will not merely be ‘gunning for gold’. She wants to create awareness for breast cancer as well. So watch out for the runner in pink and green who clocks fast kilometres.

According to Bosman she plans to go all out for pink. Her nails will be painted pink, she will wear a pink wristband and a pink head band and even her shoelaces will be pink.

“I know wearing pink and green is definitely not on for fashion purists, but I don’t care. After my health issues last year I realize that we all tend to take our good health for granted. Actually I was lucky last year because I was merely side-lined by glandular fever from which I knew I would recover. But for people who are battling with cancer there are no such certainties. My thoughts and prayers go out to all cancer patients, especially women who have been diagnosed with breast cancer. By wearing pink I want to create awareness for their plight.”

As a runner Bosman’s main challenge on Saturday will be not to allow herself to get carried away.
“I promised my coach, Lindsey Parry from the High Performance Centre (hpc), that I will not go flat-out. Currently my main goal is to run a good Comrades. He has worked out a definite race strategy and I have promised to stick to it. Actually, my deal with Lindsey is that I will follow his plan up to 42 kilometres. If I am still feeling strong at that stage, I am allowed to chase for positions. I definitely want to finish in the top ten but depending on how I feel I might challenge for a top-five finish.

“The Two Oceans is going to be good test for me. Because I am inclined to be quite competitive as a race, I sometimes get carried away. In 2012 I paid the price for being overly competitive. I was hoping to qualify for the 2012 Olympic Games in London in Rotterdam but chose to ignore my race plan and went out hard. The end result was that, instead of running a 2:34:00 marathon as planned, I finished in 2:43:00 and missed out qualifying for the Games. I now realize the importance of sticking to a specific race strategy.”

In 2013 Bosman finished 2nd overall in the Two Oceans after Russia’s Natalia Volgina who originally won the race tested positive for a banned substance and was disqualified. Bosman then went on to finish 5th in the Comrades ultra-race.

Last year Bosman opted to skip the Two Oceans and focus only on the Comrades. Unfortunately she was suffering from glandular fever and collapsed during the race. She was unconscious for a few minutes and ‘finished’ her race in an ambulance.

Bosman has no plans to race again after the Two Oceans in her build-up to the Comrades,
“I am going to a training camp in the Lowveld from 24 April and I plan to do some serious hill work in and around Graskop and Sabie.”