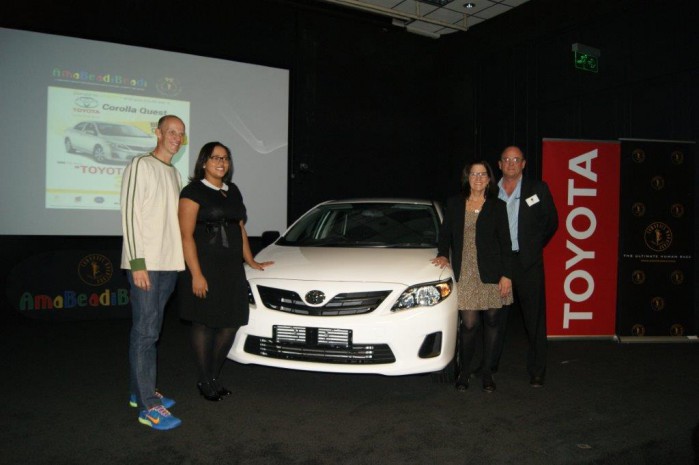 With less than two months to go to the 90th Comrades Marathon, the Comrades Marathon Association (CMA) launched its 2015 Amabeadibeadi Charity Drive in Sandton, Johannesburg on Friday, 10 April 2015.

A significant aspect of the 2015 Amabeadibeadi Charity initiative is the Toyota Win-a-Car Competition, where a brand new Toyota Corolla Quest will be up for grabs on Comrades Race Day, 31 May 2015. This is a meaningful contribution to the greater good from South Africa’s largest automotive manufacturer.

The ‘Toyota Win-a-Car Competition’ has been a driving force for Amabeadibeadi fundraising and sees thousands of rand channeled into the charitable fund every year. Runners and the greater public can enter the Win-a-Car competition by sms’ing “TOYOTA” to 34068 at a cost of R1.50 per sms.

Another exciting part of the 2015 campaign is the continuation of the Race4Charity initiative. Via this development, runners have the opportunity to “secure” their spot closer to the front of the Comrades start line and improve their seeding batch, while raising funds for a good cause. Comrades runners have raised over 1,2 million rand to date, with 445 runners signed up. So far, the current top donor is Carel Nolte who has raised more than 40-thousand rand.

Race4Charity gives individuals the opportunity to not just make a difference, but to get people involved and race collectively for the benefit of charities. Runners can go to the Comrades website www.comrades.com and follow the Race4Charity link. Runners can sign up and choose which of the six Amabeadibeadi charities they would like to support.

CMA Vice Chairperson and Head of the CMA’s Charities Sub-committee, Cheryl Winn says, “The Amabeadibeadi Charity Drive has been a defining part of the CMA since 2000. It is the aim of the CMA to give to the needy and less fortunate in a meaningful way and the Amabeadibeadi charity drive does just that. We are grateful for the hard work done by the various charities that benefit from Amabeadibeadi.”

Toyota Senior Sponsorship Manager, Delia Jackson says, ‘It is important for us to be involved in this race as Durban is a key base for our company and a significant part of our dealer network. We hope that our contribution to both the Comrades Marathon and Amabeadibeadi Charity drive will continue to make a difference in the lives of those charities they support.’

CMA General Manager, Chris Fisher says, ‘The Amabeadibeadi Charity Drive is in line with the indomitable Comrades spirit and gives back to the people of South Africa via the amazing work of our charities. We urge our runners to sign up and run for charity in order to effect a greater positive change in our country.’