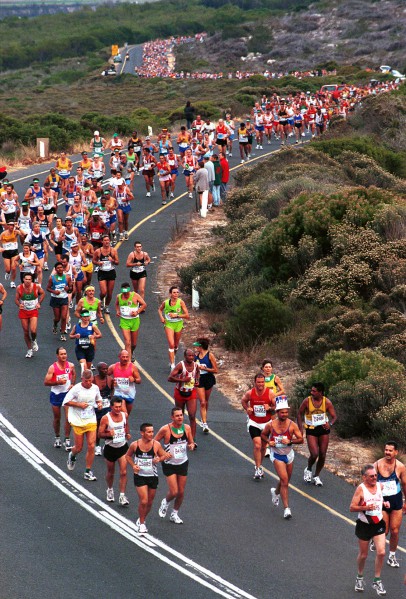 After weeks of intense discussions and close collaboration with the City of Cape Town and key stakeholders, it was confirmed today that the Old Mutual Two Oceans Ultra Marathon route will run along the detour route of Ou Kaapse Weg.

The recent devastating fires that raged along Cape Town’s Southern Peninsula, caused significant damage to Chapman’s Peak’s fragile vegetation. Since the fire, the section of the pass most affected (between Noordhoek to the top lookout point) has been closed regularly due to high winds and threatening rock falls.

“This is not a decision that was made lightly,” says Carol Vosloo, general manager of the Two Oceans Marathon NPC. “We are responsible for every single runner on race day, so all decisions were made with this in mind. We remained hopeful until the very end that Chappies would be available to us, but it became clear that the extent of the damage done to the mountain, coupled with the vulnerability of the mountain pass to weather changes, would hold a significant safety risk for our runners and volunteers.

“It was simply a risk we were not willing to take, and we have always been very clear in our intention to place participants’ safety at the forefront of all planning.”

It isn’t the first time that the Ultra Marathon has run over Ou Kaapse Weg. This detour route was used for four years between 2000 and 2003, when Chapman’s Peak was originally closed while the tunnels and catchment nets were being constructed.

“Ou Kaapse Weg as a detour route is not a new concept to us, and our team can now move forward to make the necessary logistical changes to facilitate this change,” Ms Vosloo adds.

The Ou Kaapse Weg detour route starts in Main Road, Newlands, and takes runners along the scenic South Peninsula route, through Fish Hoek and into Kommetjie. But, instead of heading towards Chapman’s Peak, runners will turn towards and over Ou Kaapse Weg, from where they will run along the leafy Spaanschemat River Road. They will then join the Half Marathon route at the Ladies Mile / Parish Road intersection before heading onto Southern Cross Drive to follow the Half Marathon route along Rhodes Drive and the M3 back to UCT. The distance remains the same.

“Although it is disappointing that the Ultra Marathon will not traverse Chappies, a ‘certain’ race over Ou Kaapse Weg is preferable to one that may be interrupted if routed over Chapman’s Peak Drive,” Ms Vosloo concludes.

Record-breaking R1-million bonus stands
Despite the route change, Old Mutual’s R1-million bonus remains in place, rewarding the winning male and female runners who respectively breaks the 56km Ultra Marathon record. The men’s record of 3:03:44 was set in 1988 by road running legend Thompson Magawana, while Frith van der Merwe set the women’s record a year later in 1989 when she ran 3:30:36.

The Old Mutual Two Oceans Ultra and Half Marathons are scheduled to take place on Easter Saturday, 4 April 2015. Some 27 000 runners are expected to participate in the event that is globally known as the world’s most beautiful marathon. This will be the 16th year that Old Mutual sponsors this prestigious road race.