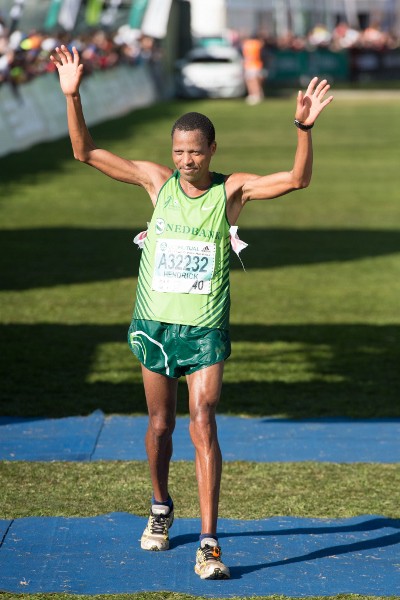 Detour or not, the 2015 Old Mutual Two Oceans Marathon is set to be a thriller with 43-year-old road running legend Hendrick Ramaala determined to defy age and a stellar field to take home the gold medal.

Local fans will be hoping that South Africans can win both the men’s and women’s category for the first time since 2000. Their hopes will rest mainly on Ramaala and Charné Bosman.

Ramaala finished second on debut last year and might even have won it if not for a tactical mistake. The South African half marathon record holder and former New York Marathon winner certainly has the pedigree, but not much experience of ultra-distance racing.

“He’d certainly not want to repeat the mistake of 2014 when he allowed Lebenya Nkoka (Lesotho) to run away from him after the climb up Constantia Nek – and then finished in second place much fresher than the winner,” said athletics writer and statistician, Riël Hauman.

This year’s detour, a consequence of the recent fires which made the ground above Chapman’s Peak unstable, means the runners will not go up Chappies, but will have to confront the gruelling Ou Kaapse Weg climb and descent. The distance will remain the same – 56km.

“Only three South Africans have won in the last eleven years, but Ramaala could become the fourth if he judges his race correctly,” predicted Hauman.

Ramaala is even eyeing the R1-million bonus put up by title sponsor Old Mutual for anybody who breaks the course record: “It’s tough to say you’re going for the record, because of the elements. Sometimes it pours and it’s usually windy in Cape Town,” he said. “However, if it’s a good day, I think it’s possible. I’m 43-years-old but I still feel I can do it.”

Ultra-distance races are, of course, notoriously difficult to predict and Ramaala will face some excellent athletes, including defending champion Nkoka and two other strong athletes from Lesotho, Warinyane Lebopo and Moses Moeketsi Mosuhli.

Other South African gold medal contenders include David Gatebe (2013 winner), Michael Mazibuko (sixth in 2014), Peter Muthubi, Motlokoa Nkhabutlane and Lucky Miya. Cape Town fans will have their eyes on Mthandazo Qhina, who was second in 2013 and ninth last year, and “local” Zimbabwean Bernard Rukadza, who last ran in 2011.

“But let’s not forget Ethiopia”s Teshome Gelana, one of the fastest marathon runners in the field, who finished second in the Tiberias Marathon earlier this year in 2:12:33,” added Hauman. Gelana’s compatriot Ketema Tadesse, who was fifth last year, is also running.

Hauman suggests that Bosman is a “great candidate” to be the first South African woman to win since 2000: “She was second in 2013 and continued to take fifth (as the first South African) in the Comrades Marathon that same year before having had to pull out of the longer ultra last year for health reasons. She is fully recovered and is South Africa’s best ultra-marathon runner at the moment.”

Another South African who is being tipped for big things is Ultra Marathon novice Tanith Maxwell. She has been one of the country’s best marathon runners in the last 10 years and set a personal best of 2:32:33 at the 2010 Berlin Marathon. Earlier this year she won the Cape Peninsula Marathon.

Other top SA ultra runners in the race are Melanie van Rooyen, Julanie Basson and Zola Pieterse, who was eleventh last year.

Defending champion Nina Podnebesnova of Russia will, however, start as the favourite.

She has not shown her hand since her comfortable win last year, apart from finishing second in the Russian Half Marathon Championships in September – in a personal best of 1:13:34.

Also in the field are 2014 runner-up, Ethiopian Shitaye Gemechu Debellu, who won the Dallas Marathon last year, 2003 winner Simona Juhász-Staicu of Hungary, who finished in the top five in all five of her attempts, the United States’s Devon Yanko, whose third position in her 2012 Two Oceans Ultra debut is an indication of her ability, and Britain's Holly Rush, seventh in the Comrades two years ago.

The women will also be hoping to break the record and net the R1-million reward from Old Mutual. South Africa’s Frith van der Merwe set the women's benchmark of 3:30:36 in 1989.

“The Old Mutual Two Oceans Marathon has established itself as one of the most prestigious ultra marathons in the world, and this year's line-up proves again its status among the global elite,” says Old Mutual Chief Marketing Officer Mokaedi Dilotsotlhe.

“We wish all of them well on their journeys, as they enjoy the rewards reaped from their planning, commitment and dedication. At Old Mutual we understand the commitment and resolve that goes into achieving long term goals like this. And we firmly believe that proper planning always yields great results.”