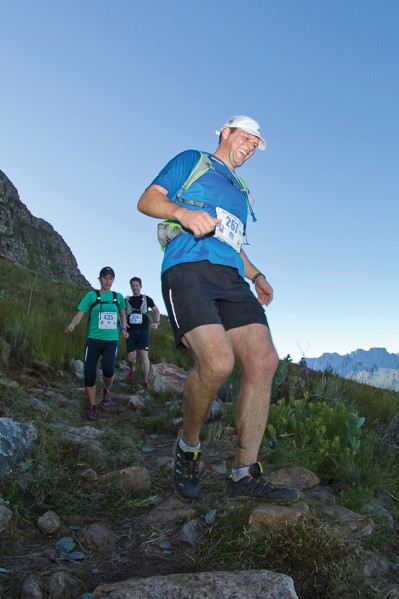 Traditionally, tight forwards in rugby – props, hookers and locks – were renowned for being big and heavy, built for scrumming and mauling, and didn’t like to run that much, but in the modern game, forwards have to be fitter, faster and more mobile. One of these modern locks was former Springbok Selborne Boome, and this has helped him become quite the trail runner since retiring from rugby.

Last year’s Jonkershoek Mountain Challenge 36km trail run in Stellenbosch was brutal. Low-lying cloud, heavy rain and strong winds sent the temperature plunging and many runners found the going extremely hard, but one runner who loved every minute of it was former rugby star Selborne Boome. “Conditions went downhill fast that day, but I am far better when it is cold than when hot, so I absolutely loved it,” says the 39-year-old fruit farmer from Elgin, who has also run the Wild Coast Wild Run with his wife Catherine, and just recently braved the wind in East London to complete his first 70.3 Half Ironman. “The 70.3 was tough, because my six-foot-six frame on a bike into the wind is not the most aerodynamic… but I enjoyed the challenge and plan to do more.”

When it comes to running, Selborne says his weight is more of a factor than his height. “I’m a largish unit at over 100kg, so for me to get going in a trail run is all about momentum. Funnily enough, I’m better going uphill than downhill, but I’m never going to win anything,” he jokingly says. “I actually played loose forward through school and varsity, and later shifted back to flank when playing oversees. I even played Sevens Rugby for South Africa, so I reckon I was far more mobile than I should have been as a lock.” As a result, Selborne says the transition to running after rugby was that much easier. “I was looking for something to keep fit, and trail running is better for my knees and back than running on the roads. There are plenty of trails right here in Elgin to run, so I don’t have to drive anywhere.”

Selborne (39) was born in Somerset West and also excelled in cricket, swimming and tennis, but rugby proved to be his best sport. He made his provincial debut in 1997 and helped Western Province win the Currie Cup that year, and from 1999 to 2000 he played for the Stormers franchise in Super Rugby. In 1999 he made his Springbok debut against Italy, and says being picked for the Boks for the first time was the highlight of his career. “My call-up was unexpected because I was still a young guy who had just played my first season of Super Rugby, and the Stormers didn’t have a fantastic season that year, but I got in as back-up to the older, more experienced guys.”

Despite missing the 1999 World Cup due to injury, Selborne became a fixture in the Bok team from 1999 to 2003, playing 20 tests and scoring two tries, and was part of the team that made it to the quarter-finals at the 2003 World Cup. Meanwhile, from 2000 to 2002 he played in France with Montferrand before returning to the Stormers in 2003, then joined the Northampton Saints in England in 2004 before returning to SA in 2007 for a swansong season with the Blue Bulls. Having retired seven years ago after more than a decade of playing top level rugby, Selborne admits that he still misses some aspects of the game. “I especially miss the competitive nature of sport, the camaraderie and the team environment, but I don’t miss the travelling and all the hotels and airports!”

Since retiring he has worked in the Western Cape fruit industry and took over running his father’s fruit farm in Elgin in September 2013. “I really enjoy the challenge. We grow apples and pears and I am out in the orchards all the time. I even work with the picking teams, because I believe it is important to understand the whole operation and what it takes.” When asked if fitting running into his demanding schedule is hard, he says he has the answer. “I get up fairly early each day, before 5am, so that I can run. If I really have to, I will run after work, but that cuts into my family time with my wife and two daughters, who are now eight and six, so I prefer the mornings. And I want to fit in more races if I can.”