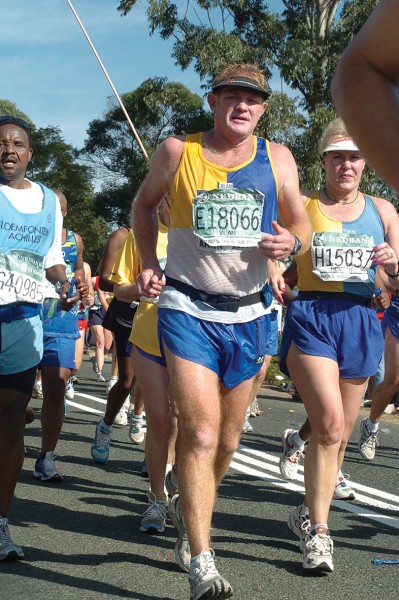 Vlam Pieterse is one of the most recognised Comrades runners of the last 15 years, despite always finishing with just a few minutes to spare, thanks to his heroics as a long-time driver of the sub-12:00 pacing bus, and in 2015 he will once again be part of the Modern Athlete Comrades Pacesetting crew.

More than half of the field at the Comrades Marathon crosses the finish line in the last hour before the final 12-hour cut-off gun is fired, and as the countdown to the gun approaches, so the runners become more and more desperate to make it home on time and claim that prized medal. But one thing they have going for them is the 12-hour pacesetting buses, with hundreds upon hundreds of passengers all hanging on to that flag and the comedic comments and motivational spurring on of the volunteer bus drivers, men like Vlam Pieterse of Hartbeespoort Marathon Club.

With 23 Comrades medals to his name, the 57-year-old has finished with 10 minutes or less to spare 18 times, so he is an expert on getting the pace just right at Comrades. But it all started in a half marathon, when Vlam helped some clubmates run their target time, and his pacesetting skills soon led to more requests, until eventually he found himself the designated driver of the sub-12:00 bus at Comrades, even before the buses became an official, organised part of the race. Thus the legendary ‘Vlam se Bus’ was born, and Vlam even used to bring along a huge weather balloon with his name on it, so that fellow runners would be able to spot him amongst the crowd at the start! Another part of the Vlam legend is the role his wife San plays on race day, popping up at regular intervals along the route with her marmite sandwiches – now just as famous as Vlam himself!

“I help runners who are hoping to reach the cut-off time, including those who are capable, but don’t believe in themselves enough,” explains the red-haired Vlam, hence his nickname. “For me, the ultra-marathon is a spiritual journey… we are fortunate to be able to run it, and knowing we can do it strengthens the mind. But sometimes we need a little bit of help to get home.” Thus Vlam breaks the distance up into smaller, more manageable segments, and keeps the group’s minds off the distance with jokes, songs and a flair for making funny comments, like “Bolyfies vorentoe, borsies uit, dames ook!” The group chants, sings, waves their hands – anything to have fun while keeping going – and every kay marker is greeted with the singing of Queen’s Another One Bites the Dust.

Vlam actually says that he can’t run races without a pack around him any more – he misses the camaraderie too much! But driving the 12-hour bus is also a huge responsibility, one that he doesn’t take lightly. “It’s really living life on the edge – great if you make it, heartbreaking if you don’t. I have learnt to remember that I am a pacesetter, not a nurse, and I have to keep the best interests of the group in mind. I must stick to my pacing chart to ensure that everyone in the bus gets to the finish on time, and I cannot slow down or stop for anybody who can’t keep up, even though it breaks my heart to see them drop off the bus.”

The Modern Athlete Pacesetters will once again be in action at his year’s Comrades Marathon on 31 May, but this year the volunteer pacesetters will be appointed well in advance and will be in action in some qualifying marathons or shorter ultras leading up to the Big C. This will allow runners to meet and run with the Pacesetters before the big day, to get to know their pacing style and strategies.

Vlam Pieterse is just one of our volunteer Pacesetters, and several others from previous years will also be returning – watch the mag for more on them in coming months – but Modern Athlete is still looking for more pacers. If you are willing to carry a flag at Comrades, please mail Sean Falconer at seanf@modernathlete.co.za and include a brief running CV. Please note that only experienced Comrades runners will be considered for this important but immensely satisfying job.