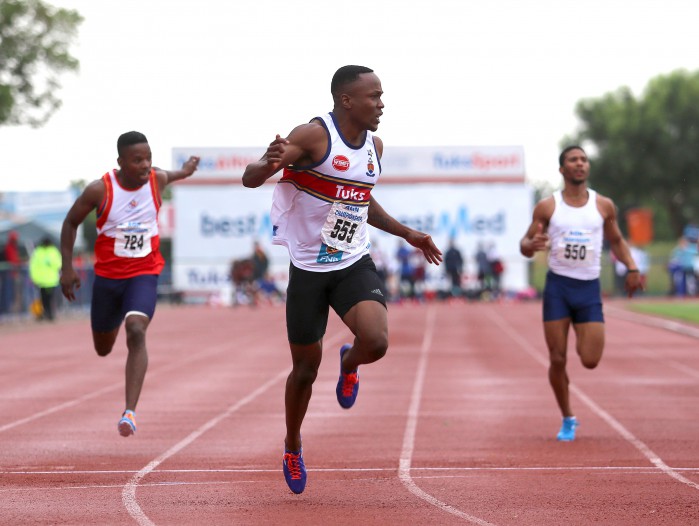 Akani Simbine came on Saturday at the Athletics Gauteng North Championships at Tuks oh so close for the second time in eight days to breaking 10 seconds in the 100 metres when he won his semi-final heat in 10.04 s.

Actually it was expected that he would do so in the final but unfortunately his chances was foiled by a brief thunderstorm about 40 minutes before the final. Simbine went on to win the final in respectable time of 10.13s. He has now qualified in the 100m and 200m for the World Championships in Beijing. On Friday night Simbine won the 200m in personal best time of 20.27s.

The High Performance Centre (hpc) athlete said afterwards that the wet track was certainly not beneficial to running a fast time. “It felt to me like my feet were getting sucked into the track.”
Simbine admitted that he was capable of running a faster time in his semi-final but purposely decided not to do so.

“I slowed down after 80 metres my reasoning being that it is not worth it break 10 seconds in a semi-final especially since I could feel the wind in my back and realized a big effort might be in vain.”
The wind reading for the semi-final was 2.3 metres per second from behind so Simbine’s time of 10.04s won’t officially recognized by statisticians.

The big question now is whether Simbine will try and break 10s before he goes on to compete internationally. There was a rumour going around on Saturday afternoon that he might try and do so at the South African under-23, Junior and Youth Championships (9-11 April) in Bloemfontein because he wants to get the sub-10 second race out of the way.

Simbine however was not prepared to confirm that he will be competing in Bloemfontein.
“Bloemfontein is certainly a good venue for running fast times, but I have not yet decided whether or not I will compete in the Under-23 Championships.”

Werner Simbine, coach, said the chance of Simbine going for a fast time at the South African Championships in Stellenbosch is slim.

“The only thing that matters at a national championship is to win the title.”