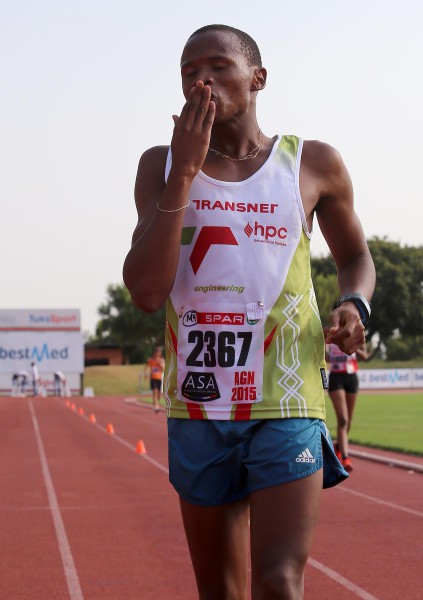 Lebogang Shange proved on Saturday in Dudinska, Slovakia with his victory in the IAAF 20km Race Walking Challenge that once he is in the “zone” there is no stopping him.

His winning time of 1:22:44 is just 54 seconds slower than his South African record performance of the previous weekend. Brazil’s Andres Choche was second in 1:23:20.

Shange actually reached another milestone becoming the first South African to win a race in the IAAF Race Walking Challenge-series. The series started in 2003.

“As I started the IAAF race in Slovakia, I asked God to walk with me. He stayed by my side until I crossed the finish line and WON the race,” is what an elated Shange posted on his Facebook afterwards.

Marc Mundell also from the High Performance Centre (hpc) made sure that he qualified for the World Championships in Beijing by finishing 10th in the 50km walk. His time was 3 hours 56 minutes and 47 seconds.

The hpc athlete really has been on a roll over the last three weeks. His success story started with him breaking the South African 3000m track record (11 minutes and 20.39 seconds) at a league meeting at Tuks. He continued his SA record breaking spree a week later when he finished second in a time of 1:21:50 in a 20km race-walk event in Lugano, Switzerland.

The plan was for Shange to compete in one more European race next weekend but Chris Britz, his coach, think that he has made enough of an impact on the international race walking scene and that he should return to South Africa to recover a bit before getting down to serious training again.
“With his victory in Dudinska Lebogang has gained a valuable 12 points in the Race Walk Series. As part of his built up to the World Championships in Beijing he will be competing in a few more of the Challenge-races.

Britz has no doubt that Shange is capable of walking even faster times.
“Lebogang has improved by leaps and bounds in the last year. Two years ago he was not able to finish at the World Championships in Moscow. That left him very despondent.
“One of the major challenges I faced when I started to coach Lebogang was to get him to believe in his abilities. That meant that he used to have a very conservative approach when he raced. He would only start to up the pace over the last few kilometres when he felt sure that there is nothing that could go wrong.

“It is only now that he is confident enough to make the racing and set the challenge to other walkers to keep up with him if they don’t want to get dropped.”