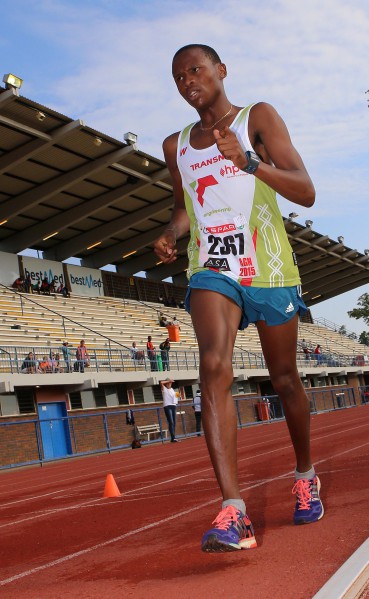 Lebogang Shange broke a South African race walk record for the second time in eight days. His time (on Sunday 15 March) for the 20km race walk event in Lugano, Switzerland, was 1 hour 21 minutes and 50 seconds.

Shange was second behind the Frenchman, Yohann Diniz, who broke the 20km world record on 8 March. The time walked by Shange, an athlete from the High Performance Centre, is 32 seconds faster than the previous South African record (1:22:21) that was set by Chris Britz in 1996 in Eissenhuttenstadt.

His record time means that Shange has qualified for the World Championships in Beijing (22-30 August). At the University of Pretoria last week, Shange bettered another SA record that was set by Chris Britz, his coach, by winning the 3000m walk in a time of 11 minutes and 20.39 seconds. His time was nearly seven seconds faster than the previous record of 11:27.20 that was set in 1989.
Diniz’s winning time in Lugano (15 March) was 1:17:24. Caio Oliveira (Brazil) was third in 1:22:00 and Tom Bosworth (England) fourth in 1:22:23.

Race walking might just be the most exciting athletics event at the moment because hardly a weekend passes without a world record being bettered.

Diniz broke the 20km race walk world record last week (8 March) at the French Championships in Arles, clocking 1:17:02. However, his record was broken on 15 March by Japan's Yusuke Suzuki at the Asian Race Walking Championships in Numi, Suzuki’s home town.

Suzuki improved it by 26 seconds, winning at the IAAF Race Walking Challenge meeting in 1:16:36.
Britz is quite excited about his protégé’s performances. He does not hesitate to predict that Shange is undoubtedly capable of even faster times.

“It would seem that Lebogang’s time for the first 10km was 41 minutes and 20 seconds and his time over the last 10km was very near to 40 minutes.

“The challenge now is to get him to go out a little bit faster over the first 10km.
“There are still a few small things in his technique that needs to be sorted out and it is very important that Shange should believe in his own abilities.”

Shange will be competing in Dudinska, Slovakia, this weekend.