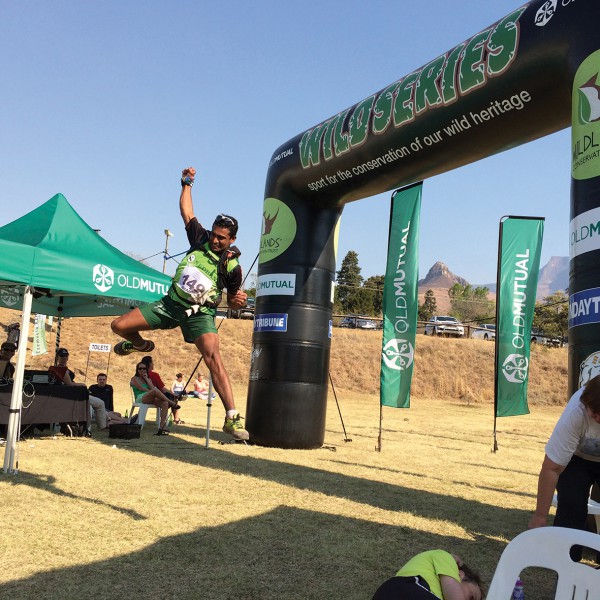 Go to most weekend races in Gauteng and you’re likely to spot Shaun ‘Horsepower’ Naidoo smiling and laughing, snapping away with his camera all along the route, and ending off his run with a few cartwheels across the finish line. He appears to be high on life, and when you hear his inspirational journey from depression and drugs to finding his true purpose on the road, you’ll understand why.

Horsepower… that’s an interesting nickname, and Shaun explains that he picked it up at school when playing soccer. “I was a great sprinter and just kept going, but it was also because I was respected on the field. Strikers hated me because I kicked their shins and wiped them out! It was a healthier, happier, simpler time… Then you finish school, study, work, fall in love, get married. Life happens and you forget those beautiful times. Suddenly you’re miserable, you can’t have kids, and you’re depressed. I compromised myself. I got divorced at 33 and wondered if anyone would fall in love with me again. I thought everyone hated me.”

To say that the wheels came off is putting it mildly, and Shaun explains that he went through some very dark days. “In the Indian culture, divorce is not normal. I was disowned. I felt guilty and embarrassed, and figured people thought I was a scumbag. Also, struggling to have kids with my ex-wife hurt me. I was overeating, did drugs, had bad friends… I was in a dark space and I wanted to die. I felt no one cared. I tried to commit suicide. I had lost my faith, my mind was corrupted and I wondered what I did to get punished like this. After my lowest low, chasing deadlines and dealing with relationship issues, it was all overwhelming. I overdosed. Then I went to rehab and found God again.”

Coming out of rehab, Shaun says his journey to recovery began on Facebook. “When you start a profile, you put in your name and I went back to Horsepower. I travelled back to my happiest time. I felt it was time to reinvent myself, so I got rid of the bad people in my life, and came up with simple steps to change: Find a job, eat healthy and go for a walk. Soon I was running, then I went from running in secluded areas because I was so shy, to routes where people could see me. After getting into races, I’d hang my medals on the wall and chime them when I came home. Today, there are over 350!”

“In that first year of running, I wanted to lose weight. There was also the intention to make new friends. I became known as the ‘Running Photographer’ and my second year was exciting because I went back to the races I had done to get PB’s. I connected with so many people through my photos, sharing them online, and I think I’ve perfected the angles, too! Taking photos and opening up to people on the road was my therapy.”

In 2012, Shaun lined up for his first Comrades Marathon, which he describes as another life-changing experience. “A year earlier I volunteered on the route with Alberton running club, giving out crème sodas, watching the top guys go through and then later the pacing buses. The next year I ran it myself, and I think Comrades is so special, because it was my definite turning point. I still prepared myself for disappointment, because my body hadn’t done that distance before, but if you really believe you can do something, there is nothing stopping you! I also ran for The Wildlands Conservation Trust after being inspired by Brad Brown at a roadshow. I got my bronze medal that I had been aiming for, coming home in 10:58. It was the most incredible feeling. I had found my purpose.”

“It was after my second Comrades, coming in 11:54 after a terrible day on the route, that I got my tattoo in Clarens. At the bottom, there is a darkness that I went through, the drugs and negative aspects that grabbed me to keep me down. That disgusting self. Then the phoenix rises out of the darkness. The phoenix has the head of an eagle – something that can see everything. Every morning it reminds me where I’ve been, and where I’m going. Out of the darkness, I’ve become aware of who I am. At the top, my Comrades number is there. While I haven’t earned it permanently yet, it’s my commitment to keep running.”

“I am an addict. Every day is a struggle, but I’m glad I have replaced a bad addiction with a good one. At Slow-Mag last year, I cut open my palm while climbing over a gate to get to the start in time. I was bleeding when the start gun went off, but I just grabbed some tissues from a lady and ran a sub-4:00. It was my last chance at a good seeding for Comrades and I got it! Four stitches later, I was being told off by the nurse but it was worth it!”

To date, Shaun has run 52 marathons, 34 ultras, and still more half marathons and 10km races, and earned his permanent number in the 1000km Challenge, having been involved with it for three years. “Today, I run every Saturday and Sunday, and if there is nothing on the Saturday, I’ll do a parkrun. I once ran three races in one day, the first at Tom Jenkins, followed by a parkrun at Delta Park, and then I stayed for a cross-country championship that afternoon. I also did three marathons in 30 hours, driving between three provinces: The Shaduka Coal in Mpumalanga, then the night race in Ottersdal, and Johnson Crane the next morning. I passed out under a tree by the end of it with three medals around my neck!”

After two years with the Alberton club, Shaun received a surprise message from the Comrades King, Bruce Fordyce, inviting him to run as a running ambassador for the Nedbank club, and he jumped at the chance. “It was a great opportunity. We created a group called The Green Machine, and the whole concept is to inspire each other and other runners. Now, when I see a ‘newb’ on the road, I encourage them to join any club, to learn and meet new people, and I often get asked for advice, about what to eat, about race routes, and if I know about extra entries and things like that. I love inspiring people, so my main philosophy now is to spread smiles on the road, especially through my photos. One of my goals is to run two hours at one of the ladies’ 10km races, just so I can walk, photograph and enjoy myself. I’m also running my first ever Two Oceans Ultra this year.”

“Meanwhile, I’ve fallen in love, I’m looking for a job, and who knows, maybe there will be little coltpowers soon? Also, two years ago, I designed this action figure of me. My face with a Superman body. It’s called The Phoenix. I wanted to create this comic of a normal guy who got divorced, went through bad stuff and fell into toxic sludge, then he got superpowers. Maybe he runs around and saves things? That’s what I want to be. I used to be the villain. Now I choose to be the hero.