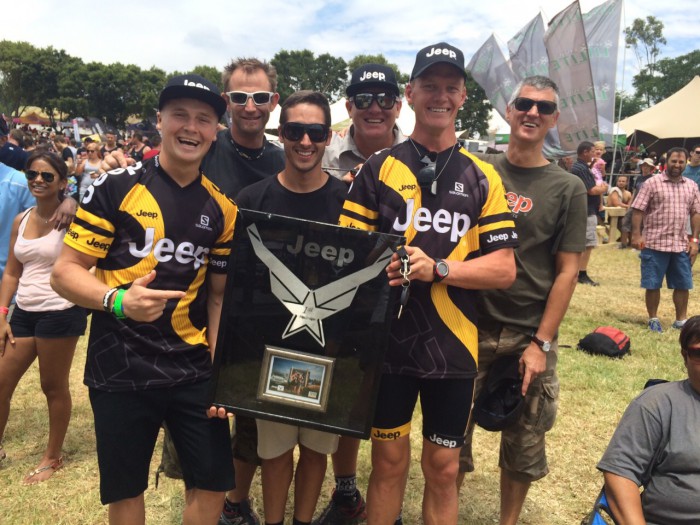 Jeep Team’s Thomas van Tonder claimed his second consecutive 2015 Jeep Warrior Black Ops Elite victory on Saturday, winning Race#2 of the eight-race series in 1h14mins, ahead of Greg Avierinos (second) and Louis Smit (third). Jay Jay Deysel, who finished second in the first event, fought hard for his seventh place finish after a week of illness leading up to the race.

Said Van Tonder after finishing, “It was a very high intensity race, as the Warrior Series always is. It feels great to have two wins in a row. Hopefully I can keep up the pace!”

In the Eastern Cape, 17-year-old Mikaela Jonsson fought hard to secure a Silver medal in her age category at the SA Triathlon Championships, which took place in Buffalo City on Sunday.

The event was a qualifier for the SA Triathlon Team, with Jonsson now waiting to hear whether she has been selected to compete in the ITU World Triathlon Grand Finale, happening from 15 – 20 September 2015 in the United States.

While there are still two races left in the series, McGregor’s fourth consecutive victory in Friday evening’s IT Works Surfski Challenge saw him secure the series title ahead of Matthew Bouman (who McGregor shared the 2014 title with).

Said McGregor, “I got the news once I got off the water and I’m stoked to have won the title again! It’s always nice to be racing neck and neck with Matthew (Bouman), he’s a top class athlete and deserved last year’s title just as much as I did but it was nice for me to be able to come back this year and get the win.”

On Saturday, Jeep Team’s Thinus Redelinghuys secured second-place after a thrilling sprint finish against Allen Britnell at Race#1 of the USN Mountain Bike Cup Series. Britnell’s winning time was a fast 1h46mins, with Redelinghuys just one second behind and Guylin van der Berg in third.

Jeep Team’s Dylan Rebello faced fierce competition to secure a sixth place finish in category (U23) at the season-opening event of the Stihl 2015 SA MTB XCO Cup Series, which took place in Port Elizabeth on Saturday. Rebello was racing against South Africa’s top cross-country specialists, who were out in full force to earn UCI points ahead of 2016 Rio Olympics selection.