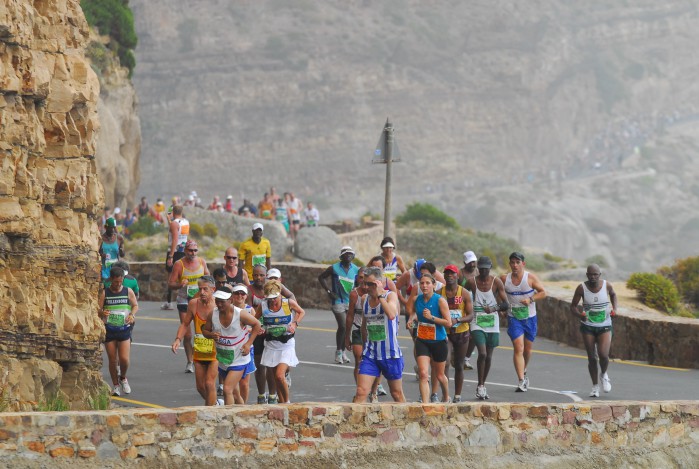 With two weeks to go until the running of the Old Mutual Two Oceans Ultra Marathon on 4 April, the traditional route that runs over Chapman’s Peak Drive remains the first choice, but the back-up route over Ou Kaapse Weg is being prepared just in case ‘Chappies’ is not usable.

Following the devastating fires that raged along Cape Town’s Southern Peninsula in early March, resulting in the closure of Chapman’s Peak Drive due to the threat of rock falls, the Two Oceans organizers are still hopeful that the 56km route will follow as normal but have stressed that runner safety remains a top priority in the Easter Weekend festivities.

“We continue to be in close contact with the City of Cape Town Disaster Management team and other key role players, and keep a finger on the pulse of all developments affecting our Ultra Marathon route, especially Chapman’s Peak,” says Carol Vosloo, general manager of the Old Mutual Two Oceans Marathon NPC. “Running the event over Chappies is our first choice, but with athlete safety being our top concern and with two weeks to go before the event, it is prudent to look at our alternative route as an option.”

Ou Kaapse Weg is the official alternative route for the Old Mutual Two Oceans Ultra Marathon, and was used for four years between 2000 and 2003, when Chapman’s Peak was closed while the tunnels and rock fall catchment nets were being constructed. The distance will not be affected, remaining at 56km.

The Ou Kaapse Weg detour route starts as normal in Main Road, Newlands, and takes runners along the scenic South Peninsula route, through Fish Hoek and Kommetjie. However, instead of heading towards Chapman’s Peak, runners will go over Ou Kaapse Weg, then along the M42 Steenberg/Spaanschemat River Road until they join the Half Marathon route at the Ladies Mile/Parish Road intersection before heading onto Southern Cross Drive. From the top of Southern Cross the original route is back in use, along Rhodes Drive and the M3 back to UCT.

“We thank runners for their patience. While we remain confident that the scenic Chapman’s Peak route will stay in place, we hope that confirming the alternative plan will empower runners to prepare for the possibility of a route change,” says Ms Vosloo. “Again, we cannot stress enough that runners’ safety is put first at all times during our planning and decision-making.”