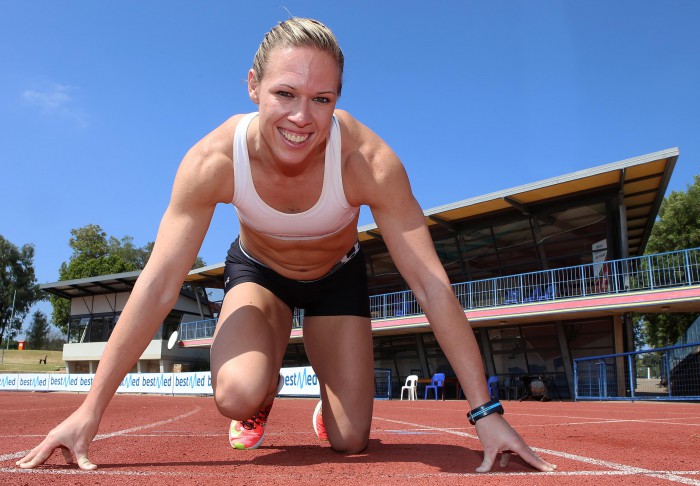 Records are meant to be broken and the older the record, the more reason to break it. This is why Carina Horn, former national champion, is back in the country from Austria to compete in the South African Athletics Championships in Stellenbosch (17-18 April) for the first time in three years.

Horn, an athlete from Tuks Athletics, has her sights firmly set on Evette de Klerk’s South African 100m record (11.06s), one of the oldest records in South African athletics. De Klerk’s record breaking-performance took place on 20 April 1990 in Germiston. Since then only Geraldine Pillay came close to improving on it when she ran 11.07s in 2005 in Durban.

During the past few seasons South Africa’s female sprinters have run ‘pedestrian’ times compared to what was happening in international athletics. However, Horn started what will hopefully be the revival of South African women’s sprinting last year when she ran times of 11.21s, 11.17s and 11.16s in European meetings. This means that she is currently the fourth fastest ever local sprinter.
When competing in European indoor meetings this season, Horn has shown that she is in good form. Of the five races in which she competed she won two and finished second twice. There was only one little mishap to which her brother refers as her ‘super glue’ race because it seemed to him as if she got stuck in her starting blocks.


More important is that Horn has twice improved her own SA 60m record by running times of 7.21s in Dusseldorf and 7.20s in Berlin. Horn is quick to point out that there is no guarantee that she will be able to improve on De Klerk’s 11.06s record. “If the weather plays along I will certainly come close to doing so, but the weather in Stellenbosch can be very unpredictable. However, if the conditions are perfect during the heats I will certainly attempt to go for the record.”


When Horn left South Africa to train in Linz under the guidance of Rainer Schopf, her best time in the 100m was 11.59s. She has since improved by 0.43s. “The reason for this improvement is that, for the first time, I am being coached to focus on the right things. Rainer keeps emphasizing that the 100m is a very technical race and he has me working on small technical details for hours on end to help me to become faster.

“For example, we will spend an entire training day on just my first step out of the starting blocks. Rainer is not a believer in more is better. While training for the indoor season I never ran farther than 60 metres and now, in the build-up to SA’s, I don’t think I will run farther than 80 metres.
“I think our decision that I will run only the 100m sprint, will also make a difference. Training for the 200 metres is something totally different.”

Horn’s dedication to becoming South Africa’s fastest woman can perhaps be best explained by the following quote from Arnold Schwarzenegger: “The worst thing I can be is the same as everybody else. I hate that.” According to Horn, who is a big fan of Schwarzenegger, she does not want to be remembered as just another talented sprinter when she could be remembered as South Africa’s best sprinter.