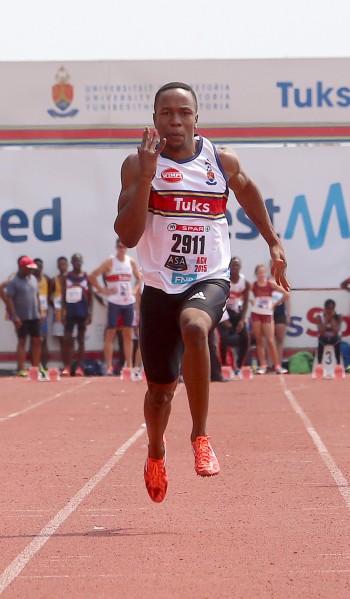 Akani Simbine proved on Saturday at a league meeting at the University of Pretoria that it is just a matter of time before he breaks through the magical 10 second barrier when he won the 100 metres in 10.06 seconds.

In the history of South African athletics only five athletes were able to run the 100 metres in a time faster than 10.10s.

South Africa’s most significant sprinting highlight was undoubtedly when Simon Magakwe won the 100 metres in 9.98s at the national championships last year, becoming the first South African to break 10 seconds.  Simbine finished second in the same race in a time of 10.02s.

However, Simbine is undoubtedly in good form at the moment,   especially considering how much he improved on his winning times of the previous weekend on the same track.  Last Saturday he won the 100m in 10.42s and the 200m in 20.76s.

“Getting rid of the rust,” was Simbine’s comment on his first two races for the season. Ever since last year’s Commonwealth Games in Glasgow Simbine has been struggling with a torn hamstring and some other niggles.

Simbine does not hesitate to describe his 10.06s run as a great confidence booster.

“I now know that I am again capable of running really fast times. Quite honestly, I did not expect to break 10.10s. I would have been satisfied with a time of 10.15s but, when I noticed the time on the stopwatch a few metres from the finish, I accelerated a bit and dipped towards the line. My time was 10.07s at first, but it was rounded off to 10.06s. I knew immediately that it was not going to be official because I could feel the wind from behind.”

Since achieving a time of 10.02s last year, Simbine had to answer the question of when he was going to break through the 10 second barrier on countless occasions.  His answer remained the same.

Simbine hopes for another fast performance during the Gauteng North Championships at Tuks this weekend.

Russel Tucker won the discus on Saturday with a distance of 60.87m.