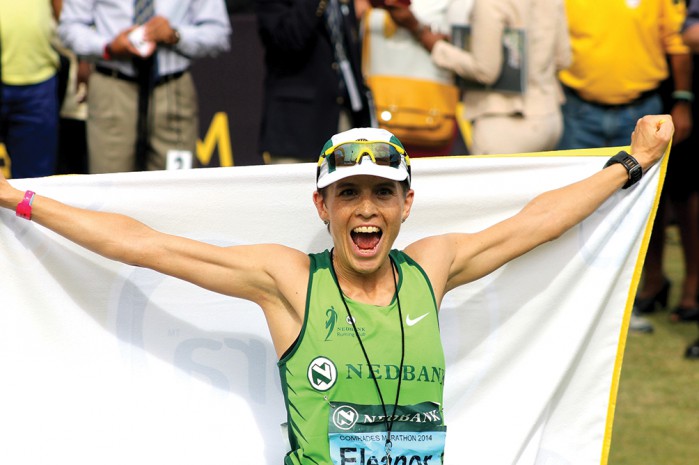 The longer the race, the stronger the finish… if you’re a female endurance athlete. That’s what the scientific research studies keep showing!

In the last stretch of the 2014 Comrades Marathon, eventual women’s champion Eleanor Greenwood looked like she had strapped on an imaginary jetpack! She was running at 3:59min/km, clocking 27 minutes and 50 seconds for the last 7km. This was not only her fastest segment of the race, it was just about the overall fastest time of the day for those last 7km – race winner Bongmusa Mthembu was three seconds slower, and the only athlete to go faster over that stretch was sixth-placed man Mncedisi Mkhize, who clocked 26:56. What this proved, yet again, is that female athletes can rev their proverbial engine a bit more in the latter stages of an endurance race.

In a recent study published in Medicine & Science in Sports & Exercise, researchers at Marquette University in Milwaukee in the US gathered information about finishers at 14 marathon events. With over 90,000 participants’ data and finishing times, the researchers compared each runner’s time at halfway with one at the finish line to determine pace. The results showed that men slowed down more than women, covering the second half of their journey around 16% on average slower than their first half. Women averaged 12% slower in the second half of their marathon. Going further into the data, the scientists also looked specifically at runners who slowed considerably in their second half by 30% or more, and found that more men (14%) fell into this category, compared to just 5% of women.

An earlier study published in the Journal of Strength & Conditioning Research also looked at how men and women who broke five hours in the 2007 and 2009 Chicago Marathons paced themselves, and found that more women were able to stick to their average pace without slowing down markedly between the 30km and 40km markers. Taking the weather conditions of these two races into consideration, the evidence points to the fact that women can maintain their speed better than men, and the study concluded that it comes down to how our bodies work, with women burning a higher percentage of fat the longer the run goes on, while men turn to burning more carbohydrates for fuel. And when men run low on carbs, that’s when they tend to hit the dreaded wall… and slow down markedly. Researchers also suggest that women tend to have a larger surface area-to-mass ratio than men, allowing heat to leave the body more rapidly, which can lend itself to better endurance and a faster finish.

MEN ARE FROM MARS…

Whether it really is how we’re built, or purely psychological, there are clearly several factors at play here. While the boys can usually trump the girls with speed – that’s just genetics – the girls can outwit by holding back to avoid the zombie shuffle over the finish line. One might argue that men tend to go all-out early in a race because of their naturally more competitive wiring, whereas women may start a bit more conservatively, but whatever the reasons, the results show that women tend to finish long runs stronger and faster.