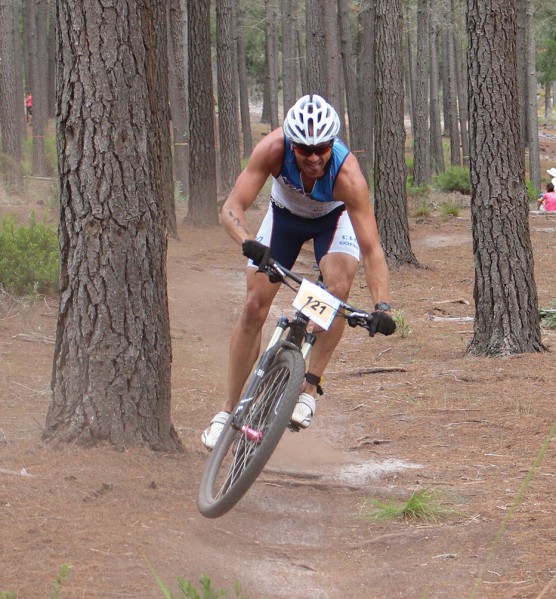 Every now and again, Matt Daneel posts a ‘Throwback Thursday’ pic of his ‘Fat Matt Days’ on Instagram, to remind himself where he has come from, and where he is going with his promising multisport career.

Matt was always a good runner. He took it up while still at school when his mom joined a local running club in Stellenbosch, ran the time trial regularly, then did a few 10km races, and in 2003 and 2004 he ran the Old Mutual Two Oceans Half and clocked times of 1:28 and 1:29. However, having gotten into a typical student drinking lifestyle and then working in the hospitality industry, Matt’s weight had steadily climbed until he tipped the scales at 107kg in 2011, and he knew he had to do something about it.

“My friend Mia Mocke, a personal trainer here in Stellenbosch, convinced me to start exercising, and I actually tried to run a half marathon. I literally thought I was going to have a heart attack!” says Matt. “That was the last straw for me, so I bought the cheapest bike I could find on Gumtree and started pedalling with friends. A short while later Mia suggested a triathlon, and since I had done some running back in the day, I now had a bike, and I swam in primary school, I thought maybe I can string a triathlon together.”

To Mia’s great surprise, Matt didn’t just finish that BSG Sprint Series event, he actually did quite well. “She said, ‘Hang on, you’re heavy, and you just started triathlon, but you beat most people I know, so you should do more of these!’ I had enjoyed it so much that I actually entered my next one that same day. Then I did my first Totalsports XTERRA off-road tri in February 2012 and had the most fun imaginable, even though it was a long day out, and at prize-giving I watched the age-groupers collecting their prize money, so I thought this is cool, and set myself the goal of finishing on the podium in my 25-29 age group.”

He duly claimed third spot in his group in 2013, and at prize-giving the two guys in front of him were handed envelopes with an entry to the XTERRA World Champs in Hawaii. “I sat there thinking, I only just didn’t make it, and that sucks, so next year I need to go World Champs!” And so the 2014 race saw a still leaner, meaner Matt at 75kg go all-out, and he finished 11th overall and first non-pro, earning his Hawaii slot – but still he was a bit disappointed. “The pro’s had a minute head-start on us, but I didn’t know the Italian just in front of me at the finish was actually only a few seconds ahead of me, so I came trotting into the finish, taking in the vibe, and walked over the finish line, just to see that I missed the Top 10 by three seconds! Still, I was the first guy with a day job over the line!”

Success has also come to Matt in other events. He can boast a half marathon PB of 1:16 and a 10km best of 34:50, and has finished on the podium at many events, including third in the Totalsports Challenge Terra Firma, second at the Slanghoek off-road tri, and first in the Die Burger mountain bike race. He is a product tester for sponsor First Ascent and also has nutrition, shoe and bike sponsors, and says he still can’t quite believe what has happened to him. “I am so incredibly lucky to have sponsors that make my sporting career possible, and I can’t believe I am now being asked to do interviews as well!”

Matt had a sponsor lined up to pay for the Hawaii trip last year, but that unfortunately fell through, so this year he says he will just have to qualify again. He will also race the SA Cross Tri Champs, along with various other tri events as well as trail runs and mountain biking events. The ProNutro AfricanX three-day trail run is another must-do on his list, with great friend Al Leslie, but that one is just for fun, as they literally laugh from start to finish. Then again, Matt is pretty much always laughing these days. Seems being lean and successful agrees with him.