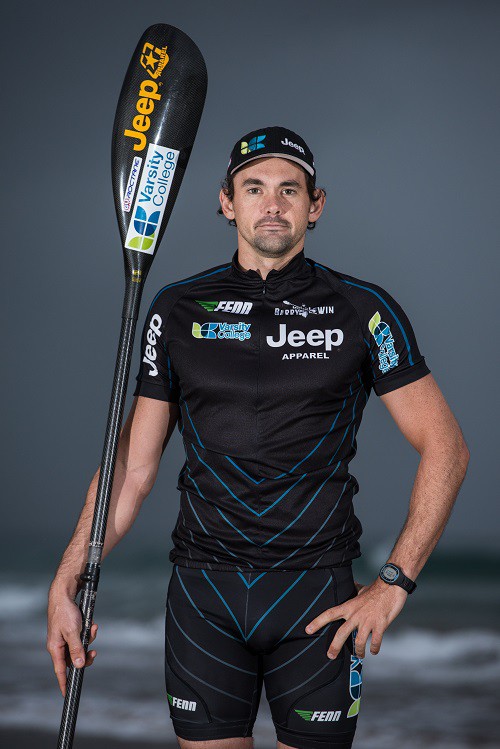 On Friday, Jeep Team’s Hank McGregor and Barry Lewin will be competing in the Bay Union Surfski Challenge – Race#5 of the Varsity College Surfski Series. McGregor is a firm favourite, having won Race#1 and claiming victory at last weekend’s SA K1 River Championships at the Two Day Klip River Canoe Marathon in Gauteng.

After a solid start to the season, Lewin will be aiming to remain in the top 3; he has finished third in the previous two Varsity College Surfski Series races.

In Multisport, Jeep Team’s rising star, Mikaela Jonnson, and Michael Lord (one of the team’s newest athletes) will be travelling to Gauteng to compete in Race#1 of the Momentum Health Dual X series, taking place on Saturday, 7 February, at Hakahana.

Jonnson (17) has had an impressive start to 2015; coming second overall in the Elite Women’s Category at Totalsports XTERRA Buffelspoort on 25 January. Jonnson was also first in the U18 category. A week previously, she won the KZN Triathlon Championships in her age category.

Lord (19) will be geared for gold in his new Jeep Team colours after an outstanding 2014 saw him finish in second place at the 2014 World Cross Triathlon Championships in Germany. Lord is also the 2015 SA and African Cross Triathlon champion.

The season-opener of the Dual X series will see athletes take on a 5km run, 30km MTB ride and then a further 2.5km run.
MTB

Jeep Team’s Gregg Brown (18) will be competing in Series 1 of the KZN Provincial Downhill Championships, taking place at the Karkloof MTB Club on Sunday, 8 February.

Brown will be racing for victory after a successful 2014 saw the young Downhill star represent South Africa at the 2014 DHI World Championships in Norway and place second in the Junior category at the 2014 SA National DHI Championships.