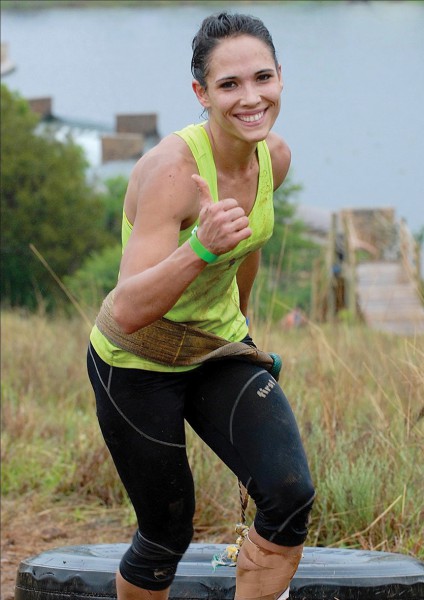 When Hanneké Dannhauser entered her first obstacle course race last March, she put herself on a startlingly fast track to the World Champs of obstacle racing just seven months later, despite breaking her ankle along the way. No wonder she’s earned the nickname GI Jane!
– BY SEAN FALCONER

Having heard about the Jeep Warrior Series in February 2014, Hanneké just knew that obstacle course racing was meant for her. The 26-year-old from Bloemfontein was working part-time as a personal trainer and had spent a lot of time in the gym herself, and the challenge appealed to her – but not some entry-level starter course… No, she entered the Black Ops elite race at Warrior #2 in Midrand on 2 March! “I come from the farm, so I went straight for the hardest option,” she says with a little giggle – and she proceeded to finish third in the women’s field, but realised where she could improve in order to be more competitive.

“In February I was running over seven minutes a kay, so I started training athletics with coach Rufus Botha, who has coached many top runners, including Zola Pieterse, and now I am running four minutes a kay,” says Hanneké, who used her steadily improving pace and stamina to win the next Warrior event in Irene. Then she also won in Hartbeespoort (May) and Ballito (July), but in September the Tarzan Swing obstacle at Warrior #6 in Hartbeespoort took its toll, and after numerous attempts at swinging across, an exhausted Hanneke fell and fractured her ankle. Undaunted, she carried on trying until she made it through the obstacle, then limped home in third position.

That saw her miss the Stellenbosch leg of the Warrior series in early October, but she had enough points in the bag to be selected to go to the OCR World Champs in Cincinatti, USA, in late October, and just eight weeks after her injury, she finished fifth out of 70 elite women. “The World Champs was a bit intimidating, especially since I had recently been out injured, but I really enjoyed the event,” says Hanneké. “The obstacles were not as tough as in SA, but there was a lot of up and down in the running. Overall, I think our SA obstacle racers are right up there with the best in the world – so I think we should invite them to come compete here in our races!”

Brutal conditions
A few weeks after the World Champs, Hanneké was back in action at the Warrior Nationals in Gauteng, looking for another win and the points to clinch the 2014 series win. She led for much of the race, but on a brutally cold and wet day, she couldn’t match Dominique D’Oliveira’s strength towards the end of the course and had to settle for second place on the day and in the series. The decisive moment came on the third-last obstacle, appropriately named Breaking Point, a tough combination of ropes, rings, chains and monkey bars.

“It was terrible out there for all of us, with many athletes unable to finish the course. We were so cold that they eventually gave us space blankets to wrap around ourselves while we were waiting at some of the obstacles,” recalls Hanneké. “Dom was breathing down my neck all race, but I thought I was going to win it, so I went into that obstacle without resting. I’ve learnt this year to do races at my own pace, and I made the mistake of pushing too hard at that point. So it was really hard to watch Dom get through it before me and disappear up the trail, but we have really bonded this year and have a wonderful friendly rivalry going. The best athlete on the day won – I gave it my all and was happy with second.”

I want more!
Unsurprisingly, Hanneké is now raring to go with the 2015 season, with all the Warrior, Impi, Gladiator and Spartan events pencilled in on her calendar. “Obstacle course racing has become my passion, and I feel I have always had the talent, but am only just discovering how good I can be. I also love that I can see my success and my healthy lifestyle inspiring others, especially younger girls. As I always say, look up, get up and never give up – because that’s where success comes from.”