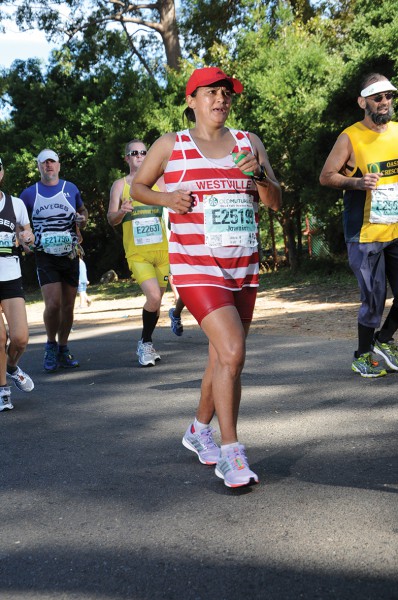 Growing up in the 8In 1996 the South African athletic authorities selected a team to run in SA colours in the Comrades Marathon, to take on the growing contingent of international entrants, but one athlete they overlooked was Jowaine. She had finished second in the Two Oceans Marathon in 1992, then sixth in both the Two Oceans and Comrades in 1994, and she added another second at Oceans in 1995, the same year she won the All Africa Games Marathon title, but her 1995 Comrades had delivered a disappointing 219th position, hence she was not selected.

However, after years of overcoming obstacles in pre-1994 athletics, Jowaine reacted by running with a point to prove. “I decided to go out there and show them what I can do, and I finished fourth in 6:55:19, and was the first South African woman home. I beat all the runners selected to run for the SA Team.” Her day got even better when State President Nelson Mandela was once again on hand at the Comrades prize-giving. “It was a real privilege to be handed my gold medal by Madiba, and I gave him a hug. I was the first runner to do so that day, and after me, everybody else also wanted a hug from him, too!”

Born to Run
Born in 1966 in Stellenbosch, Jowaine began running in high school. “I did fairly well, and realised I’m one of those ‘slow-twitch people’ that will do better at longer distances,” she says. She earned Western Province colours from 1984 to 1987 as well as Western Province Schools colours in 1986, which then saw her made the captain of the SA Schools Cross Country Team under the pre-1994 SACOS council for so-called coloured sports. Next Jowaine attended college to study teaching, and while there she made the SA Colleges Cross Country team in 1988 under the SATISA umbrella, and was again made team captain.

In 1989 she married Allan, who had started as a training partner, then become her coach and manager, and it was then that Jowaine became motivated to see how good she really was. “My times were more or less the same as the top white athletes, but this was all before the merging of racial sporting codes, and things were very different then. Our SACOS races were often run in the afternoon, separate from white SARRA events. Even though SARRA races were open to all races, there was pressure not to run there, but I decided I had to take on the best white athletes. I didn’t want to be known as a controversial person, and some said it was a political statement, but my attitude was that if we start and finish at the same points, let’s see who is best.”

One of the Best
Jowaine did part-time teaching in between training, and her most successful years were between 1992 and 1996, with her turning professional in 1994, the year she was also runner-up in the SA Marathon Champs. In 1995 she finished third in both the SA Marathon and Half Marathon Champs, and with the 1996 Olympic Marathon in her sights, Jowaine then won the 1995 All Africa Games Marathon, and is still the only female South African to win a major championship marathon. “That was one of the highlights of my career, because I showed that I could beat the Ethiopians and Kenyans. I qualified for the Olympic squad, but my time was unfortunately only a B qualifier, while Elana Meyer had an A qualifier, and the selectors decided to send only her.” Putting that disappointment behind her, Jowaine refocused on the ultra scene and was rewarded with her brilliant fourth at Comrades.

Today, living and teaching in Westville, Durban, with two sons aged 21 and 14, she is still running, and has a few landmark races planned in 2015. “I ran my ninth Two Oceans last year, so I will be going for my permanent number in 2015. I also tried my 10th Comrades again in 2014, but when I got to 85km, I just couldn’t keep anything down, and I would have had to run 4:30 per kay into the wind to make it, so I called it quits. Now my goal for the year is those two permanent numbers.”
0s as a non-white runner meant overcoming challenges for Jowaine Parrot, but with determination, talent and courage, she became one of SA’s top female long distance runners of the 90s.
– BY SEAN FALCONER