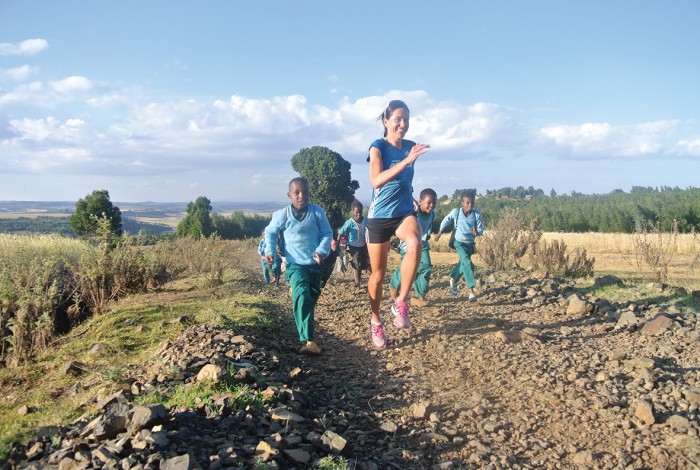 During November I had the great privilege to join Julia Bleasdale from the UK at the Yaya Village for some altitude training in Ethiopia. Julia finished seventh in both the 5000m and 10,000m at the 2012 Olympics and has been going to Ethiopia since 2006. She is one of the most adventurous and interesting runners I have met, and gets very excited about contours on Google maps and new routes waiting to be explored!
– BY RENE KALMER

I’m sure most of you have heard about altitude training, where athletes train at altitudes of 2000m and more above sea level. The thinner air has a lower oxygen content, which causes a shortness in breath and forces the body to form more red blood cells to deliver oxygen in the blood. The formation of haemoglobin, the oxygen-binding part of red blood cells, also increases. The result is that a runner can now deliver more oxygen to working muscles and remove waste products, like lactic acid, more effectively, and when returning to lower altitude, you can perform at a much higher level than before. The ideal is to train at altitude for at least four to six weeks, but the gain unfortunately only lasts between two and four weeks.
The secret is not to train too hard, too soon, so the first three days we took it really easy, adapting to the high altitude of 2700m. It is quite a shock to suddenly run 5:30min/km whilst it feels like running sub-4:00min/km. It feels like your lungs want to climb out of your chest, and when running uphill, my upper body would just go lame. Julia, a.k.a. Mountain Heidi, just kept reminding me that “altitude is my friend” and that I had to accept kilometre splits as slow as 7:00min/km going uphill. I must confess, the first week my eyes were just glued to her footsteps in order not to take a plunge on the trails. It was a great adjustment to do most of my training off-road, compared to running mostly on tar roads in SA.

After a week, we felt brave enough to join one of the main marathon groups in Ethiopia for training. We organised a driver to pick us up at 5am and after an hour’s drive we were in Sebata, where 90 runners met at 6am for the Saturday session. All the runners were very friendly, welcoming the two “forengi’s,” and we were more than 30 girls attending the session, so the coach divided us into three groups. I was more than happy to be in the slowest group, and the session for the day was 3km, 4km, 3km, 4km and 3km. I averaged 3:25min/km in this session and had to give it my all to keep up with the ‘slow group’ – a real eye-opener for me!

Every run in Ethiopia was a great adventure, but what I will treasure most is all the kids we encountered on our runs. Some were walking as far as 6km to school, and it is so special to hear their laughter echoing through the valleys. I’m grateful for the joy that Ethiopia brought back to my running, and I learnt to appreciate the small things again… like opening a tap with clean running water. Ameseghinallehu (thank you in amharic) for the humbling experience, Ethiopia, I look forward to seeing you again soon.