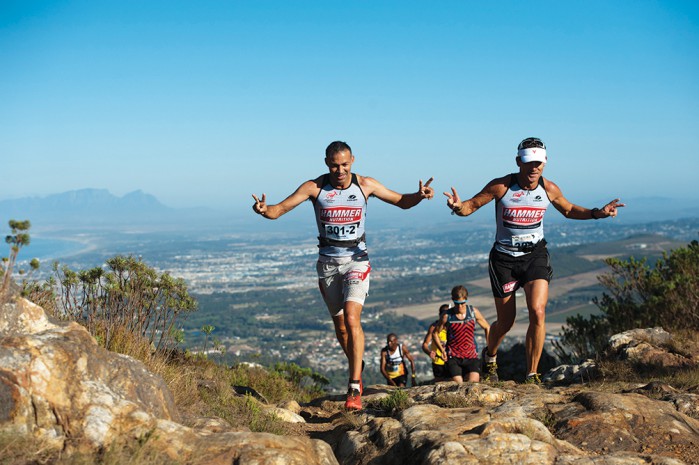 He’s got a few nicknames in trail running circles, most to do with his age, but none of them have anything to do with being slow. On the contrary, Noel Ernstzen is still giving the 20 and 30-year-olds a run for their money, despite being in his 50s.
– BY SEAN FALCONER

It’s been more than a year since Noel Ernstzen’s epic 2013 run at the Otter Marathon, when he became the first masters age-grouper (50 and over) to break the five-hour barrier in the Grail of Trail, but still people are talking about it. In fact, it has been called the most inspirational run of 2013 by quite a few people in trail running circles. That’s because Noel set out to do something that very few runners were able to do, let alone somebody in their 50s, and he brought the proverbial house down in the process. Pandemonium broke out when he popped out of the trees near the finish, and with race commentator Altus Schreuder going crazy and everybody cheering him on, Noel made it across the final water crossing, despite a few stumbles, to cross the line in 4:57:04. Then the emotion got the better of him and he lay down and had a little cry as his wife Meg embraced him. There were quite a few other people wiping away a tear as well.

Three years earlier I would have won the damned thing with that time, but that 18th means more to me than any of the first places I had run,” says Noel. “The thing about setting yourself goals is that you need to visualise that you can do it, so I visualised breaking five hours a million times, crossing the line, hitting the watch and seeing sub-five, hugging my wife… I lived that moment many times over. And then I did it.”

Never Too Old
Noel (54) only took up running late in life, which makes his achievements in the sport all the more remarkable. He had last done serious sport in junior school when he started cycling and later mountain-biking in his 40s, then also got involved in adventure racing, and in 2010 he found himself lining up for a five-day adventure race in the Southern Cape that included a marathon-length run on the first day, along the Otter Trail. “I had to start running to train for that event, so I was not as fast as the other guys and not very good on the technical running, and I remember I was so peeved that so many people beat me on that run, because I am quite competitive. So, I decided to train for it and see how fast I can do it.”

“When I did the Otter proper the first time, I saw the top two guys doing sub-five hours, and I thought it’s unbelievable to run a race like this in sub-five, it must be such an achievement, so I decided to go for it myself.” That saw Noel embark on an incredible run of wins and podium finishes in race after race, usually beating all (or nearly all) of the much younger runners along the way. He raced the Namaqua Challenge, ProNutro AfricanX, Table Mountain Challenge, Fisherman’s Trail Challenge and many others, getting fitter and faster all the time, but everything was geared up to prepare him for the Otter, and his sub-five goal.

Family Man
Born and bred in Tokai, Cape Town, Noel is married to Meg, a fellow competitive runner and mountain biker who often podiums in events, and they have a daughter, Frances, who is quite the runner as well, having recently finished second in the Berg and Beach two-day trail running event in Kleinmond. He also has a son, Wayne, from an earlier relationship, and three grandkids, and true to his ageless character, he has a unique relationship with his grandson Kai: “He calls me Dude, because I refuse to be called Grandpa!”

Noel recently sold his kitchen design and construction company after 23 years and is currently a partner in the Trail & Tar bike and trail running shop in Tokai, in partnership with his future son-in-law, Grant Bender. “We opened Trail & Tar three years ago and we’re looking to open more branches soon,” he says, adding that one of the highlights of each week is the Wednesday evening trail runs that Trail & Tar host.

Taking a Break
Just before Otter 2014, Noel’s racing plans were derailed when he was diagnosed with a torn medial meniscus, which had been bugging him for a couple of months, and he required an operation. So he had already written off the rest of the year for recovery, when disaster struck: While doing a trail running photo shoot, he was walking towards his bag in order to change his shirt when he slipped and fell badly, ripping his ankle ligaments.

“It was the worst fall I’ve ever had, despite years of bombing down mountains at 60km per hour,” he says with an ironic laugh. “Now maturity doesn’t sit well with me, nor patience, but for once I listened to the doctors and kept the air boot on for the full six weeks, and now I’m seeing three physios, one for my knee, one for the ankle, and one for general aches and pains. I also waited until the exact day they said I could run again, although I was already cycling to work each day to get the legs going again.

Planning the Comeback
Now that Noel is able to start running again, he says he is undecided whether to make the Otter his focus in 2015. “I love the event, but I kind of feel I’ve been there and done that. I don’t want to go there just to take five minutes off my time – if I run Otter, I want to go for a sub-4:30 finish. I truly believe I am capable of that, if the conditions are right, because when I broke five hours, I ran it specifically with a five-hour finish as my goal, and felt I could have gone faster. But I also have unfinished business with the AfricanX, and I’m quietly confident that my fitness will be good enough to give it horns.”

“I often get asked by people how I can be competitive at 50-plus against the 20 and 30-year-olds, but I say it’s simple, I’ve been around longer than them, so I’ve had longer to train and should be faster than them. Seriously though, there’s nothing to say that a 50-year-old must be slower than a 20-year-old, especially in long races, where probably 80% is in the mind and 20% is fitness. To be frank, us older guys are better at mind games than the youngsters!”