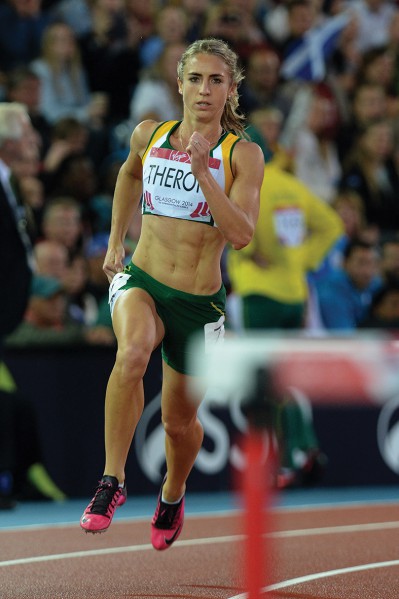 Having experienced both elation and disappointment in her 2014 season, SA’s top female 400m hurdler, Wenda Theron-Nel, is getting herself ready for World Champs in 2015, Olympics in 2016 and hopefully a long-awaited new SA record. – BY LAUREN VAN DER VYVER

Things didn’t go as well as Wenda hoped at the Commonwealth Games in Glasgow earlier this year. Having broken her 400m in May in Potchefstroom, going from 53.41 seconds to 52.53, and then bettering her 400m hurdles PB from 55.36 to 54.82 in June in Marrakesh, she went to Scotland full of confidence in her speed and form. However, having made the final of the hurdles, she was disqualified for a technical infringement – but the Pretoria-based speedster bounced straight back from that disappointment to win gold at the African Championships in Marrakesh just a week later, in a time of 55.32.

“Winning was such a surprise after not doing as well as I wanted at the Games. I went to Morocco with no expectations. I just wanted to have fun, but came away with a win. It was my year’s highlight!” says Wenda, but then adds, “I’m driven by my passion for the sport. Medals are great, but when they become greater than the passion, then it’s time to stop. Instead, you train for that one out of ten race that goes perfectly – the pattern, hitting the hurdles seamlessly and everything clicking…” And judging by her times and results, she had that a few times this year!

Born and raised in Worcester in the Cape, Wenda was always impressing at athletics days at school, starting with 50m sprints as a youngster and also taking part in hurdles and the long jump. It was only after school, when she moved to the capital to study Dietetics at the University of Pretoria, that she turned her focus to the 400m hurdles and found that it clicked. Having completed her studies and gotten married to Jacques in 2012, she now works half days so that she can pursue her dream of qualifying for the 2016 Olympics in Rio.

“It’s any athlete’s dream to be at the Olympics, and it is up to me to take it further. After every year, it becomes a bigger possibility, and I’m blessed to have great support,” explains Wenda. “My husband gets it. He is a triathlete and has run Comrades, so he understands the love. There is no issue getting up early because training comes first.” Her family has also been a consistent support in her career. “They’re proud of me and win or lose, they’re there. My coach Hennie Kotze, who I’ve been with for four years, is also important to my success. I work hard, but it’s his encouragement and programme that’s pushed me.”

Currently busy with off-season training, for the next three months Wenda will get back to basics at the High Performance Centre in Pretoria, mixing hill sessions and stairs, for strength and power, with track training twice a week to get her fitness up for the coming season. She also mixes it up with spinning and kickboxing in the off-season. Come February, Wenda will focus a little more on technique and speed, adding tyre-pulling sessions with shorter sprints to work on her sharpness. “Right now, the volume is pushed up, but it’s not as intensive. We do group circuit training and I gym on my own twice a week and on the weekends. With my work hours so flexible, I can arrange when I train,” she says.

“Also, being in dietetics, it’s easier to stay healthy, and with World Champs coming up in Beijing next year, it’s ideal to keep your race weight in check. I want to make the final at World Champs – in 2011 I made the semis, and I want to go one better – so that is my goal, and then on to Rio 2016!” Another goal the three-time SA champion and All Africa Games silver medallist in 2011 says she hopes to achieve this coming season is to challenge Myrtle Bothma’s long-standing 1986 SA record of 53.47. “I have to drop a second off my time, but I think I can do it!”