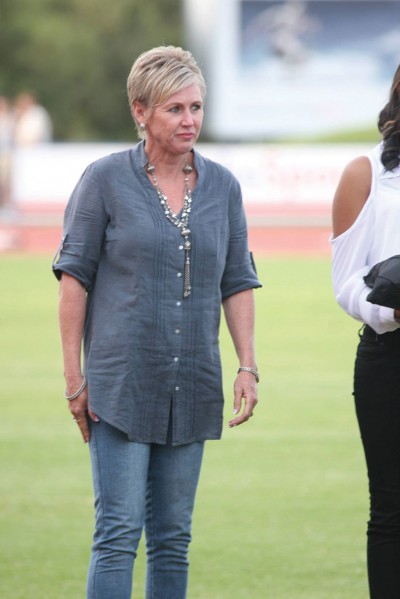 In a grade one athletics day meet, Evette was on her way to sprinting glory when she tripped and fell, but she dusted herself off and still managed to cross the line fourth. A year later she was back and this time finished top of the podium, a step she would frequent for the next 25 years… “I specialised in the 100m and 200m sprints and when I was 10, I ran times on par with the world’s best juniors,” she says. “At 16, I scored my first national record and started running against the seniors, and at 17, I was a Springbok, training with the great Bessie Windell. She was a mother and mentor – and I needed her on my travels, because I didn’t know much back then!”

Evette also received great support from her school headmaster: “He said I should take the first four months of the year to concentrate on my running and even arranged exams to be shifted! In those days, everyone appreciated athletics more.” Another aspect of her career that she cherishes is the support she received from her family, and later husband Gous. “When I went to Cape Town for nationals, my parents would be on a train, and Gous was there for my records. Also, at SA’s and Nedbank prestige meetings, the athletes motivated each other. There was zero politics and every meet was packed with spectators. We were a family back then.”

UNTOUCHABLE
In April 1986 Evette ran 50.57 in the 400m for a new SA record, but that was eclipsed just nine days later by Myrtle Bothma. Her two other SA records have stood for a much a longer time! In April 1989 Evette posted 22.06 in the 200m, which has not been beaten in over 26 years, and was the second-fastest time in the world that year. Just over a year later she clocked 11.06 in the 100m, on the same day that she ran a wind-assisted 10.94 in an earlier heat. “It’s incredible that the records have lasted. Hennie Kotze, who was also part of Bessie’s group, showed me a photo of those runs a while back. There I was, barefoot and strapped – I only wore spikes when it was raining or the tartan was too hot.”

From 1982 to 1991, Evette claimed 10 straight SA titles in both the 100m and 200m, and in 1987 she added the 400m national title for a cleansweep of the women’s sprints, which prompted a telegram of congratulations from the State President. She added another two 400m titles in 1992 and 1993, but the early 90s also proved quite frustrating. With SA finally back on the international stage, Evette tore her Achilles and was left out of the 1992 Barcelona Olympic squad. “I wrote them telling them I will be right when the time came, but there was politics, even though I qualified for the 100m, 200m and 400m!” She did get to the African Champs in 1993, bringing home a bronze medal in the 200m, but in 1995 she retired. “I was sick for six months with a coxsackie virus, which turned into glandular fever, so I stopped at my peak, then got pregnant soon after I made my decision to leave.”

YES, COACH
Today, Evette (49) still trains three times a week to keep active, and her daughter is proving a very talented 400m runner as well, while her younger son is more a rugby player. She teaches Life Orientation and Physical Education at Duo Edu, a learner-disabled school in Pretoria, and coaches young athletes at Waterkloof High School and Queenswood Primary, having taken up coaching in 1997. “I love coaching, but I’m not just a coach, I want to find out what they’re feeling and thinking. Athletics has been my calling, and while there were ups and downs, you learn to keep on. But I think if I had the same opportunities that athletes have today, I’d have run under my records!”