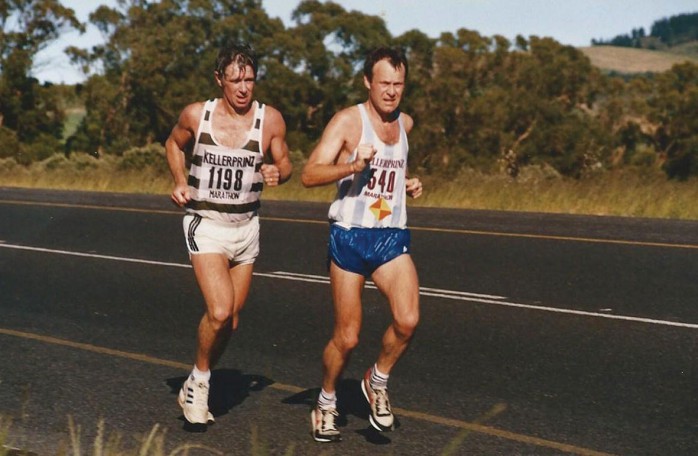 Waiting for Chet Sainsbury outside his house at 5:45am to go for our midweek longer run, I often ponder as to why, what is there to prove. Between us we have run 67 Two Oceans, hundreds of marathons and so many other runs. The obvious answer could be to watch the early sunrise over the Helderberg Mountains, to enjoy good health and the joy of fitness, yet for me it can all be embraced in a single concept: Friendship.

Chet and I go back a long way. We were at school together. Later he offered me a short-lived job at Old Mutual. For his and my sanity, I did not linger long. Yet through friendship we ran many of the Cape trails well before they became the fashion; we hiked even more trails with our families; we celebrated mutual birthdays; we shared exhilarating races, and later, memories of past glories.

A good friendship like ours, glued together over so many races and training runs, allows us to be very different personalities, yet still enjoy each others’ company. Mutual respect is the basis of this. I know of the huge stresses and responsibilities Chet faced with driving Two Oceans, what he had to deal with for many years being Chairman of Western Province Road Running, and his other rugby portfolios. Yet on the road or trails, he is a different, more relaxed person. We can laugh at the absurdities of others, discuss rugby and how we would make it better, or politics, visits to family overseas, and of course, how we will run the perfect next Oceans – and the training schedule it will entail.

Yet the respect is also based on specifics. How can I ever forget when only two weeks after running the Dolphin Marathon – between Walvis Bay and Swakopmund, in a howling wind – we ran the 1986 Kellerprinz Winelands Marathon over one of the hilliest routes in the country. To get a gold as a veteran you had to run sub-2:50, and the race organiser had been vociferous in saying there was no chance Chet would do it. At halfway we were on 84 minutes, when the schedule required 81, and with the biggest hill, not unlike Constantia Nek, still to come, we had to run negative splits to go under 2:50. The look of deep embarrassment on the race organiser’s face was, as the advert said, “priceless.”

Yet it is not only about Chet and I, there are others, and building up to each Oceans, our group of runners with 30 or more Two Oceans completed can be as competitive as any younger racers. Tony Abrahamson with 39 behind his name, still pushes the pace whilst managing to look graceful, and Mark Wagenheim, who is renowned for having the most organised training group in town – consisting mainly of a bevy of AAC ladies – has 36. One has to do an annual Nek to Nek with them in order to keep abreast of current trends: Which is the best Woolies to shop at right now; is Banting a con or not; do those face creams really work; and to pick up recipes that become favourites for the next few months – this year it was Terry’s date rolls that took top honours.

Yet it is not only about old and valued friendships. That common denominator of running has allowed me to expand friendships across age groups. The pleasure of watching a younger runner build and then succeed in their ambitions, whether it be Comrades, Oceans or a marathon, compensates for our fading abilities. Through them we can still race and be relevant.

But friendships are the glue that keep us running. Not faster, or longer or further, or to boast how many Two Oceans we have done, but to be still participating in life. We are not accepting our boundaries, nor allowing age to relegate us to mere watching life through TV, and sliding into turgid comfort.

Friendships built over decades of running. Running through the seasons, running the hard yards, running when you floated along and running when your body cried “no more.” Friendships giving us purpose to get up in the morning, to step outside and share the joy and pain, health and injuries, happiness and despair. To share the sunrise and the sunset with a friend.