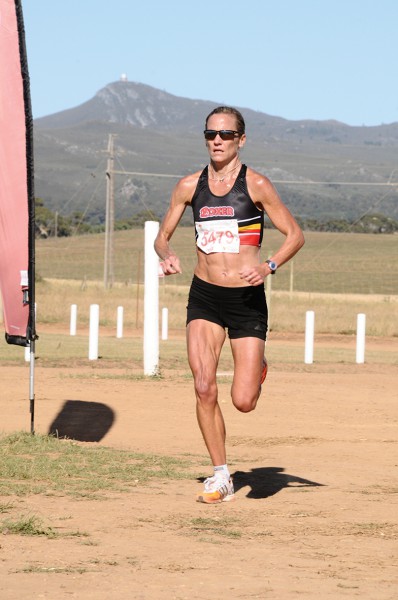 The New Year is set to bring a new challenge for Olympic marathoner Tanith Maxwell when she steps up to ultra-marathons for the first time, but she says she is looking forward to this new chapter in her running career.   – BY SEAN FALCONER

Having run a best time of 2:32:33 represented South Africa in the marathon at the Olympics, Games and World Champs since 2006, as well as featured in many ‘Big City’ marathons as well, Tanith says the time is now right for her to step up in distance. “I think I need a new goal, to try something else, so the Two Oceans ultra will be my focus for 2015, and everything is geared towards that,” says the 38-year-old Durbanite.

“I don’t think my marathon career is over, but I have changed my training and diet to go longer. I have been invited to run the Dubai Marathon in January and I will use that a springboard into Oceans, because I think a good marathon athlete can hold on for the 56km of Oceans. I keep getting asked about Rio 2016 and the next Olympic Marathon, and I won’t write it off totally, but it won’t be my focus. My whole career has been centred on representing SA and qualifying to do so, and now I’m looking for a new challenge.”

Tanith developed a love for running from a young age thanks to her parents’ participation in the Comrades – Dad Brian ran it 11 times while Mom Jenny has three Big C medals. “After helping to second my parents at Comrades I became fascinated by distance training, and I started running at the age of seven when my school hosted a 5km fun run, which my dad ran with me,” says Tanith. “In the same year, my Mom’s cousin from the Free State, Kevin Flanegan, came down to Durban for the 1983 SA Marathon Champs and won it. I was at the finish and this left a big impression on me. He bought me my first pair of running shoes and helped me with training advice, and my first 10km was in Durban in 1988, the L’Oréal Femina Ladies Race. We started on the Kings Park athletics track, and I remember bolting out, then dying on the beachfront section and finishing looking the worse for wear, but I eventually got the hang of pacing.”

Meanwhile, the family began moving around quite a lot as Tanith’s parents explored work opportunities overseas, going over to the UK four times as well as stopping off in New Zealand and Canada. “Dad’s a vet and Mom is a histologist, so both could find work. They tend not to stay in one place too long, but have been back from the UK now for six years.” Tanith, who works part-time in her mother’s practice in Durban, initially studied at the University of KwaZulu-Natal, then transferred to Stellenbosch University, where she completed her B.Sc Sport Science degree. “My folks had relocated to the Cape, and I was desperate to try out the competitive athletics scene down there, so I moved down and joined Johan Fourie’s training group. That’s where my running really clicked.”

Tanith rapidly improved from a 1:30 half marathon PB to

finish second in the 1997 Gun Run Half Marathon with a vastly improved 1:19. “I was very chuffed with my time, but I still had no ambitions to become a full-time runner. That came a bit later when I was invited to join the Liberty-Nike team and they sent me to run the 2003 Voet van Afrika Half, where I dipped under 1:17. That led to my selection for the 2004 Southern Region Half Champs in Mauritius, my first time representing SA, and I finished second.

Later that year Tanith ran her first marathon, when visiting her folks in the UK. “I got my folks to enter me in the Edinburgh Marathon and just ran it for fun, but then I finished second in 2:47, although I suffered because I didn’t have the distance in my legs. That led to an invite to the 2005 Frankfurt Marathon, where I ran 2:41 and finished ninth, having also finished seventh in the Vienna City Marathon earlier that year.” She also claimed that year’s SA Half Marathon Champs title in Durban, and her great form saw her selected for the 2006 Commonwealth Games team to go to Australia, which remains one of the highlights of her career. “There is always something special about lining up to represent your country for the first time at a World Games, and I was on cloud nine from start to finish, running another 2:41.”

Tanith finished second in the SA Marathon Champs in 2007 and then ran the 2007 All Africa Games Marathon, as well as the World Athletics Champs marathons in 2007 and 2009, with top 10 finishes in numerous international races in between. Then came 2010 and her best year to date, after she signed up with Cape Town-based coach Andrew Bosch. She finished second in the Xiamen Half in China and the Bristol Half in the UK, was third in the SA Half Marathon Champs, and in marathons finished 15th in London and eighth in Berlin. “Running London was amazing, as I had lived there for quite a few years, and I was most pleased about my PB 2:34. Then in Berlin I ran 2:32, so 2010 was definitely a good year – I broke all my PBs from 15km to the marathon!”

After such a great year, it was almost inevitable that 2011 would prove to be less successful and Tanith struggled with illness, a chronic Achilles injury and a loss of confidence. Unfortunately, the 2012 Olympics in London then also proved a frustrating disappointment as a fit-again Tanith picked up a chest infection and was taken out of the Olympic Village so that she wouldn’t infect her marathon teammates, Rene Kalmer and Irvette van Zyl. “London is one of my pinnacle highlights, because I had watched the Olympics since 1984 and never dreamt I would be part of it, but the chest infection did spoil things a bit, even though I managed another 2:41.”

With a newfound confidence thanks to Andrew’s input and recent good results, Tanith is now looking forward to 2015 and her first foray into ultras. “After my competitive days are over, I see myself giving back to the sport through coaching, but for now, being able to have your sport as almost your full-time job, doing something that you love, is such a privilege – especially with incredibly supportive people like my parents, Andrew and my manager Rhyn Swanepoel behind me. It would have been impossible to reach the heights I have without them.”