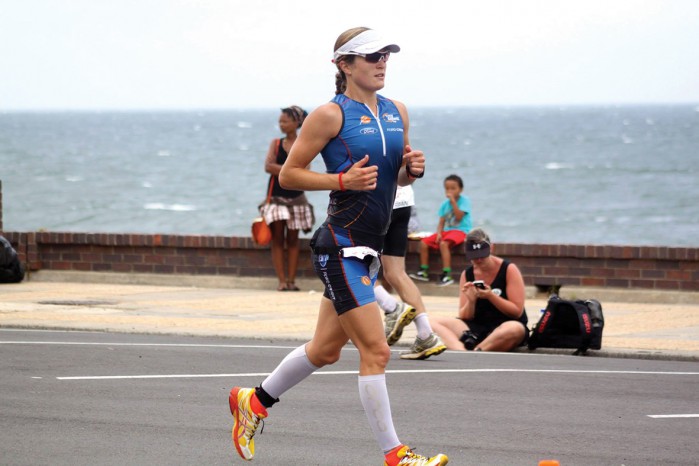 Having represented South Africa in both gymnastics and triathlon, Dominique D’Oliveira has now turned her focus to obstacle course racing, and with a number of wins and podium finishes already under her belt, she’s well on her way to more sporting success.
– BY SEAN FALCONER

Arriving at the tough Tarzan rope swing obstacle with about one kay to go in the sixth elite Black Ops race of the Jeep Warrior Series in Johannesburg in September, a muddy Dominique took a second to catch her breath as she waited her turn, watching as the girls ahead of her lost their grip or ran out of strength and fell off the ropes. Carla van Huysteen had arrived at the obstacle first, nearly 15 minutes clear of second-placed Hanneke Dannhauser, with Jetaime Ribbink and Dominique a few minutes further back, but neither Carla nor Hanneke could get past the ropes.

As they walked back to try yet again, Dominique wiped her hands, took hold of the first rope and went for it, sailing right through on her first attempt, not stopping to worry about the fact that she cracked a few ribs falling off this same obstacle at the Warrior Nationals in November. While the other elite girls could just watch, she headed for the finish, crossing the line with what has become her trademark leap for joy and vivacious smile, to claim her second Warrior race title – and it took another 40 minutes for the second-placed woman to finish!

“They always leave the hardest obstacles for the end at Warrior, so my strategy in the race is to hold back in the middle and save my energy for the end,” says Dominique. “In Warrior, you keep trying to get past an obstacle, or you can do burpees instead and move on, but then you don’t get an official finish and don’t qualify for prize money. The problem is, the more you try an obstacle, the more you get fatigued. I actually finished and went back to go cheer the other girls on, but Carla and Jetaime just couldn’t do it, and Hanneke eventually did it after about 20 tries, despite falling awkwardly and breaking her ankle!”

Dominique (30), who works as a personal trainer in the Durbanville area of the Cape, did her first obstacle race at the 2012 Impi Challenge in Stellenbosch, but just for fun. Then in 2013 she did the Impi again and another smaller obstacle race, where she heard about the Warrior series, so she entered the Cape Town leg of Warrior and won it, then went to the Nationals in Joburg. After recovering from her rib injury and completing a second 70.3 Ironman, she finished third in the first Impi Cape Town of 2014, picked up second and third positions in Warriors in Joburg and Ballito, won the next Joburg Warrior, and got third in the Cape Town leg in October (where she took it easy due to not having recovered fully from a flu bug).

One of the reasons Dominique has taken so quickly to obstacle racing is her upper body strength, honed by 14 years of competitive gymnastics. She competed for SA at the World Champs in Belgium as well as competitions in Italy, Germany, Tunisia, Malaysia and Namibia, but in 2002, ranked number one in the country, she faced Commonwealth Games disappointment. “Not long before the Games, some or other committee decided that they didn’t want to send a female team, because they didn’t think we would medal. Typical South African mentality, they just flushed people’s sporting dreams down the drain… but I didn’t let it stop me, I carried on competing and then got a scholarship to go study in the US.”

That saw Dominique earn a B.Sc in Criminology and Psychology at the University of Utah in Salt Lake City while competing on the highly competitive NCAA circuit, alongside elite gymnasts from all over the world. While there she also studied personal training, and not long after getting back to SA, she started working part time at Virgin Active to save up to pursue her newfound passion: “A friend of mine in the US took me up in a little two-man plane and let me take the controls for a while, and I just fell in love with it. So when I got back in 2007, I decided I wanted to become a pilot, but when I realised how long it would take for me to get my commercial licence, I changed my mind, because I knew it would consume my life just as gymnastics had. Also, I was enjoying the personal training, because it felt like it was where I was supposed to be. I still want to do my private pilot’s licence one day, but career-wise I have a passion for helping people and being in a sporty, health and wellness field.”

Another passion Dominique began developing while in the USA was for triathlon, when a friend dared her to do a sprint triathlon. “I had never done any kind of endurance event in my life, and my longest runs had been 60m down the vault runway, so I nearly died just trying to run one kilometre! But I borrowed a mountain bike to train on, rented a wetsuit and a road bike for the race, and ended up coming third in my age group, so I thought, hey, I can do this.”

“When I moved back to SA, I was still trying to figure out what to do with my life and was actually thinking about trying pole vault, because I had heard that gymnasts make good vaulters, but a couple of friends were doing triathlon, so I did some more sprint tri’s. I moved up to my first Olympic distance tri in 2010, then the first of my two 70.3s in 2013. I think I’ve come a long way with the endurance side of things, even though I don’t think my body is naturally built for running, so this year I have really worked hard on doing base mileage.”

That saw her line up alongside friend Natalia Ongers at the three-day ProNutro AfricanX Trailrun in March. “I had never run that far before, so for me it was more a mental thing to get through the distance. I liked that we had no expectations, just wanted to have fun and get through each day, so we were pretty stoked to finish 10th while having such a jol, and I want to do it again next year.” Dominique’s bucket list also still includes the full Ironman, “to tick it off the list,” and the Comrades someday as well, but she is in no hurry, because right now obstacle racing is her focus.

“It really is so much fun, because it challenges my whole body, and my mind, and reminds me of the challenge gymnastics gave me. And now that I have found that I am quite good at it, I want to give it a good go. That said, I’m kind of in limbo between triathlon and obstacle racing, because I’ve still got an entry for 70.3 next year, so when obstacle racing is done for the year, I need to shift focus back to tri. My original goal was to try and podium in my age group at 70.3, and I would love to get to the 70.3 World Champs, but with the success in obstacles and my change of focus, I have to be realistic. On the other hand, if I do well in the Warrior series next year, I could get to the Obstacle Racing World Champs in the USA. Now that would be awesome!”