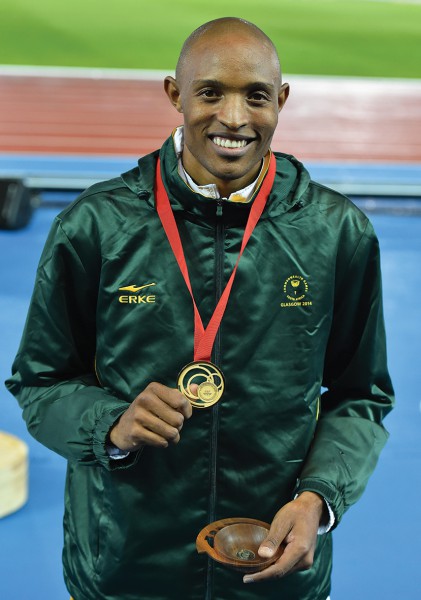 Having competed on the world stage for more than a decade and brought home 20 major medals, long jump and triple-jump specialist Godfrey Khotso Mokoena has been in golden, record-breaking form in recent months, and once again has his sights set on Olympic glory in 2016.

Modern Athlete:It’s been quite the year for you, winning gold in the triple jump at the Commonwealth Games in Glasgow and the African Champs in Marrakech, jumping a massive 17.35m to break your own SA triple jump record at the Continental Cup, and you also secured African Champs silver in the long jump. You seem to be in the groove…

Khotso:I’m going in the right direction! The last time I did well on the world stage was back in 2010, and last year at World Champs in Russia, I came seventh in the long jump finals, and struggled to get amongst the best. Then at the end of last year, I changed coaches and now work with Emmarie Fouche, and after nine years of giving triple jump a break, we thought we’d give it a shot. Now, everything is falling into place and we’re slowly building towards Rio 2016. It’s down to my willingness to work hard and I’ve brought my experience to training. Every time I go out now, it’s a new-look me.

Emmarie’s programme works for me. My body is able to accept it because it’s catered for me. It’s an all-round programme with running on the track, pool sessions, Pilates and strength work in the gym. Jumping in the pit only comes near the end part of a season, where you focus on technique. A lot of people don’t realise the importance of balancing your running and strength work. You can’t be too big, because you can’t extend your knees and your body posture and jump is affected.

MA:I believe you were originally a high jumper?

Khotso:Yes! I was pretty good at school, in between cross-country, running and shot put. I didn’t even try long jump back then. In 2001, I represented South Africa at the World Youth Champs, finishing fifth in the high jump. A year later, it was long jump, which was an easy transition for me, and in 2002 I broke the SA Youth Record. Triple jump was natural to turn to a year later, and the first time I competed, I broke the SA Junior Record, then added a World Junior Champs title in 2004.

MA:Did you feel like you had something to prove, having been off the triple jump scene for so long?

Khotso:Finding that spirit for big competition is something I wanted again. As an athlete, you have to stand up on the world stage and fight. Only that will elevate you to the next level. The public care about medals, but many don’t know how many hours go into getting ready to compete – for the Olympics, we work continuously for years for just two nights of competition.

MA: And you have to juggle this hard work with being a father to your one-year-old son. Does the support from family and friends make it easier?

Khotso:Since I began competing and travelling, my family have been there – win or lose, when there is any spare time, I’m playing daddy to my boy.

MA:Most importantly, can you grab a medal in 2016?

Khotso:Definitely! I’m not young anymore, but I’m still improving, so why not take that chance to get to the highest level?