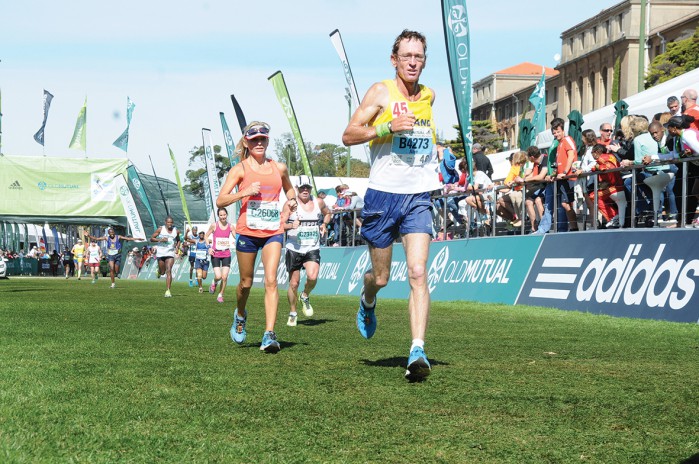 With a can-do attitude and some help from clubmates and friends, car guard Abre Jordaan has managed to earn 12 Two Oceans and 11 Comrades medals, despite not being able to afford to pursue his running passion.

For the past 18 years, 46-year-old Abre Jordaan has spent nearly every single day in the Somerset Mall parking lot in Somerset West, come rain or sun, keeping guard over the parked cars. Spending up to seven hours straight on his feet, hoping that the car owners will give him a few Rand to say thanks, he then still finds the energy and motivation to go running. But what most people don’t know is that these car guards are not paid by the mall – they actually pay a daily fee of R28 to ‘hire’ a section of the parking lot, and then rely on tips to make a living. “Many people think we get paid, which means they don’t need to give us anything, so if I can make R150 a day in tips I am happy, I can survive,” says Abre, “but we get no days off, no benefits, and if you’re sick and can’t work, you not only have no income, you lose your spot to somebody else. It’s a hard life.”

Abre’s story began with his mother being hurt in a car accident while pregnant, resulting in him taking a hard knock to the head. “I am normal, but I feel I am a bit slower with some things – but then the difference comes in when I run. That’s the only place I am fast,” he jokes. His father abandoned the family when he was still little, and his mother subsequently remarried and moved to Touwsrivier, while Abre stayed in the Cape to attend Trade School up to standard eight. Having done his military service, Abre worked as a petrol attendant, then did loading work on trucks, and next found himself in Greyton, working in a hotel, where he met a woman, got engaged and had two kids, but the relationship didn’t last, and eventually neither did the job. That saw him end up at Somerset Mall in 1996, living in a nearby caravan park.

The incredible story behind Abre’s running exploits is that he has been helped by various people along the way, including Marius Claassen of Rola Motors sponsoring two of his trips, while his club has helped several times as well. However, having done 11 Comrades, Abre had decided that his Big C days were over, until recently… “A family I know saw me training and approached me, saying they want to pay for me to go run the 90th Comrades, because it is going to be a special race, and they even want to go with me to support me. It really is incredible, and I am so grateful!”

“I can’t afford new shoes, so the mall sponsored a pair one year for Comrades, as did the Cape Town Market, and my Strand running club also bought me a pair one year. I often use old shoes that other runners no longer want, and just the other day a clubmate arrived at the mall with a brand new pair of the Comrades-branded New Balance shoes for me, because he said they don’t suit his feet. Now I am hiding them away for next year’s Comrades.”