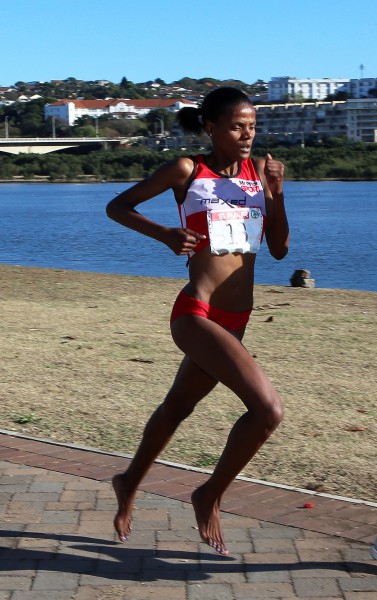 Phalula finished in fifth position in the Joburg race at the Wanderers in Johannesburg on Sunday, but her outstanding performances in the first two races of the year, in Cape Town and Port Elizabeth, which she won in record time, gave her a head start in the race to win the keys to a Nissan Micra. Despite a hamstring injury, she finished in fourth place in Durban and Pretoria, and maintained her lead over the chasing pack.

Phalula’s twin sister Lebogang made the 2014 series something of a family affair, winning the Durban and Joburg races. However, a poor start to the year, when she finished 17th in the opening race in Cape Town meant that she was unable to catch up with her sister. She finished in fourth position, with 77 points.

Diana-Lebo has said she will share the car with her sister.

“We are twins and we share everything,” she said.

Lebogang agreed that they would share, and said she would use her prize money from the Joburg race to pay for petrol and insurance for the new car.

“And next year, I’m going to win the car,” she said, smiling.

Rene Kalmer, three times winner of the Grand Prix finished second on the 2014 Grand Prix table, with 81 points, proving the value of consistency. Although it was the first time for a number of years that she failed to win a race, her top 10 finishes in all five races ensured she earned enough points to win a cheque for R30 000.

Third place went to last year’s Grand Prix winner, Mapaseka Makhanya, who had a much quieter year than her stellar year in 2013, when she recorded triumph after triumph on road and track. Like Kalmer, she proved the value of consistency, with top 10 finishes in all five races. In fact, the difference between Makhanya and Kalmer came down to Kalmer having finished second in Port Elizabeth and third in Durban, while Makhanya’s best position was third in Port Elizabeth. She earned 78 Grand Prix points – three less than Kalmer, and just one more than Lebogang Phalula.

Boxer clinched the club competition, ending years of dominance by Nedbank. Boxer finished with 248 points, followed by Transnet, with 158. Maxed Elite came third, with 111, and Nedbank fourth, with 82.