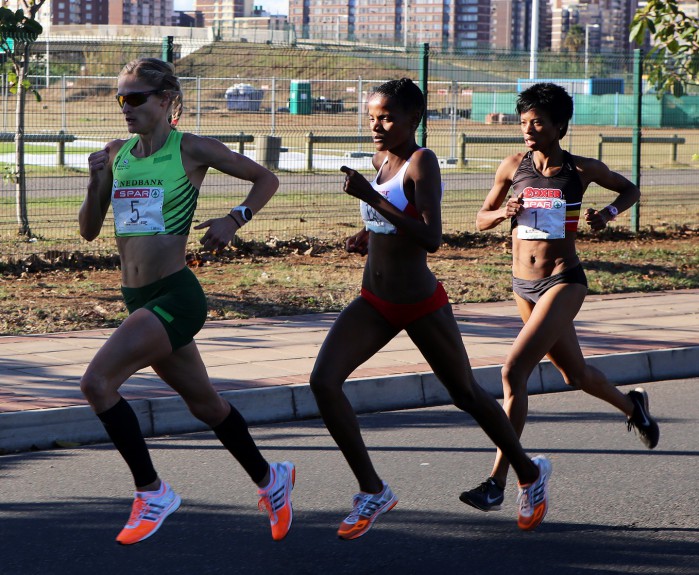 Elite runners are gearing up in preparation for the final leg of the SPAR women’s 10km Challenge series at the Wanderers Club on Sunday October 12th.

Barefoot runner Diana-Lebo Phalula, who is virtually assured of winning the SPAR Grand Prix, started training again earlier this week after a break to recover from a hamstring injury.  She won the Cape Town and Port Elizabeth legs of the race in record time, and top four finishes in Durban and Pretoria earned her an almost unbeatable lead of 28 points over her nearest rival, Rene Kalmer.

Phalula’s twin sister, Lebogang, who won the Durban race and finished third in Pretoria, said that she was aiming to finish second on the Grand Prix log.

“Lebo can win the car this year, but I also need a car, and I’ll be aiming to win the car next year,” said Lebogang.

Lebogang Phalula won the Cape Town Marathon 10km race on Sunday in 33.22 minutes, and she travels to the Netherlands later this week to run in a 10km race in Amsterdam.

“I’m quite happy with my form.  I’m doing well, but I’m not happy with my times.  I wanted to run 32 minutes, and I haven’t achieved that yet, but that is my aim for next year.  And next year, I will be going all out to win the car in the SPAR Grand Prix.”

She is not the only runner who will be heading for Europe this week.  Rene Kalmer is running the Berlin Marathon on Sunday, on what has been described as the world’s fastest marathon course.  Kalmer has won the SPAR Grand Prix three times,  and was the first runner to win the prize of a Nissan Micra.

Irvette van Zyl, who won the Pretoria Challenge in record time, has been in the form of her life recently, after recovering from serious injury.  On August 9, she smashed her personal best by half a minute to win the Totalsports Women’s race in Stellenbosch in 32.20 minutes, equaling Zola Budd’s personal best for the  third fastest time by a South African woman.  Van Zyl followed up her victory in the Pretoria race by winning the Nelson Mandela Marathon near Pietermaritzburg in glorious fashion the very next day, finishing 19 minutes ahead of her nearest rival.

However, Van Zyl, who had been expected to shine in the Cape Town marathon last Sunday, had to drop out of the race because of a knee injury.  It is not clear at this stage if she will be fit to run in the final Challenge race, but if she is fully fit, she could well challenge for second place on the Grand Prix log.

Another contender is last year’s winner, Mapaseka Makhanya, who has not been able to match the heights she achieved in 2013.  But she has a strong competitive streak and can never be ruled out.