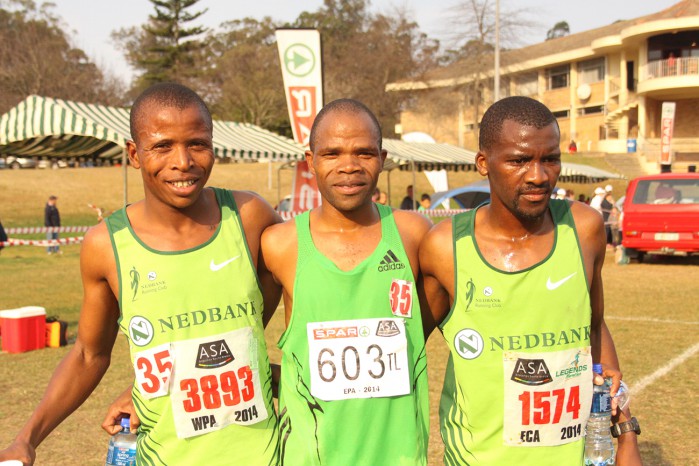 Going up the Mountain

LAST Saturday was National Women’s Day, and members of the fairer sex played a significant role in the organisation of, and participation in, the Oak Cottage KwikSpar Mountain Drive half-marathon held in Grahamstown – even the sponsors’ Jill White was an ever present figure at the start and finish venue.
Of the 320 runners and 24 walkers who conquered the mountain in what many described as a challenging 21,1-kilometre race, no less than 133 were women.
The highly-successful event was organised by Grahamstown Run/Walk for Life Athletics Club, having taken over that duty from Albany Road Runners who had organised it for more than ten years.
Also undergoing changes were the start and finish venues, as well as portions of the route. This year’s event started and finished at Rhodes University’s Prospect sports fields, moving across town from the Albany Sports Club.
Most of the entries received were from Port Elizabeth, Uitenhage and Despatch club members, mainly because it was a participation league event held under the auspices of Eastern Province Athletics, and league points were at stake.
There were also runners from Queenstown, Somerset East, Port Alfred and East London, while a good number of Rhodes students also entered and enjoyed the tour of the city and its surrounds.
Each finisher received a very smart medal and ribbon which drew very favourable comments from participants. The medals were sponsored by the Eastern Cape Department of Sport, Recreation, Arts and Culture.
Generous cash prizes went the way of the leading finishers in the overall finishing positions as well as the various categories, while a host of spot prizes were handed out liberally.
A member of Port Elizabeth-based club Nedbank said she loved her medal, “and it was all worth it”, while a Charlo runner commented: “It’s a very nice medal – I’m proud to display it.”
Overall winner on the day was 35-year-old Lungile Gongqa with no club affiliation – he finished in 1 hour 09 minutes 01 second to set a new course record, while Mthandazo Qhna of Nedbank was runner-up in 1:10:52. In third place was Melikhaya Frans, also of Nedbank, in 1:12:11.
Basie Bonaparte of Albany Road Runners showed a clean pair of heels to many runners half his age – the 48-year-old was the first member of a Grahamstown club to finish. He finished in 1:19:29.
First woman over the finish line on what is normally a soccer ground was Ntombesintu Mfunzi of Nedbank in 1:26:50, with clubmate Babalwa Ngcoko next in 1:38:48, and Siphokazi Nojoko of Motherwell placed third in 1:39:24.
First Grahamstown woman to finish was Christine Coppinger – the former Rhodian was 74th overall in 1:43:51. Next local woman was Mandy Jackson, 87th in 1:48:41, while the third-placed was Jade de Sousa, 107th in 1:53:19.
The King and Queen of the Mountain titles went to Port Elizabeth runners – Lungile Gongqa and Ntombesintu Mfunzi respectively.
Held in conjunction with the run was a race over the same course for walkers. Overall winner was Richard Alexander of Albany in 2 hrs 22 mins 25 secs, with Andre Pienaar of Bluewater Bay runner-up eleven minutes later. Karen Davies of Grahamstown was third overall, and first woman, finishing in 2:47:49.
Organising club, Run/Walk for Life Athletics Club, extended its sincere thanks to all the sponsors of the race, and those who assisted in one form or another – Oak Cottage KwikSpar (title sponsor and sponsor of the bottles of Spar spring water handed to finishers); Tops Bottle Store; CM Heunis Building Contractors; Department of Sport, Recreation, Arts and Culture; Health & Sport Inc (offered free massages to tired and sore muscles at the finish); Rhodes University Sports Administration for the facilities; Coca-Cola; 6SAI Battalion for providing marshals and sweep vehicle; Cameron Smailes for providing the sound system and music; Thackers Photography; plus VGHS, Round Table, Rotary, CrossFit, 6SAI Battalion and Rhodes Athletics Club for manning refreshment stations.
A group of Port Elizabeth athletes, who compete in races in that city almost every weekend, said they enjoyed the race, though they found the last four kilometres a bit tough after “climbing the mountain”. They said the refreshment stations were excellently run, the marshals did a fine job, and the medals were outstanding.