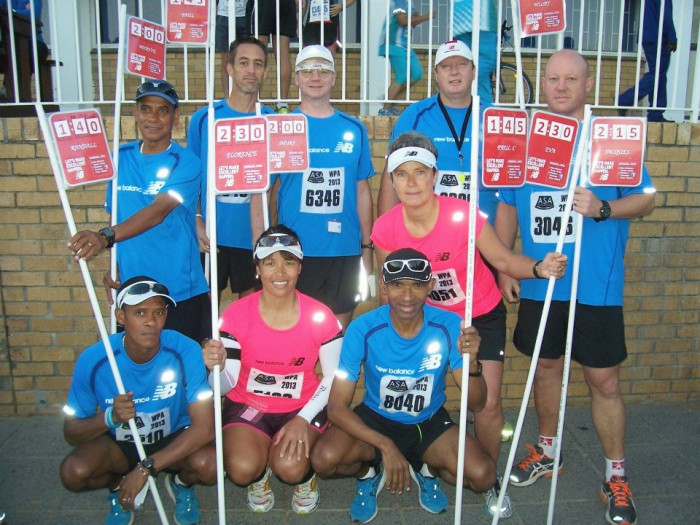 Line up for a race in the Cape and chances are you will see colourful flags sticking up out of the massed field of runners, with target times written on them such as sub-60 or sub-2:00. That means the New Balance Western Province Pacesetters are in action again, helping others to run their target times.

It takes a special type of runner to give up their own race to help others, but most weeks a group of ‘Average Joe’ regular runners from various clubs in the Cape voluntarily carry their pacing flags in races from 10km right up to ultras, to create pacing buses and help other runners achieve a goal time, a qualifier or a new PB. One of the founders of the New Balance-sponsored group that paces in up to 40 races per year is Paul Murphy, and he says, “We have a core group of around 10 regular pacesetters and then there are extra people that will help out at some of the bigger events. The pacesetters are all experienced runners that want to give something back to the running community, and they get rewarded by helping other runners reach their time goals.”

The pacesetters run with the goal of finishing about 30 to 60 seconds inside the goal time on their flags, so that people running just behind the bus can still get the goal time as well, and they aim to run at an even effort throughout, taking into account the ups and downs of the course, which is not easy, says Paul. “Doing even-effort pacing requires knowledge of the route, which may involve practice runs on the route, because being either too far ahead of or too far behind goal pace are both bad.”

Besides being able to judge and calculate pace, a pacesetter must also be able to interact with the runners in the bus to let them know strategy and give them updates on splits, and Paul says the pacesetters regularly get asked whether the bus is still on time. “But the best moment is pacing someone to a PB over the last kilometre of a race, when you can hear the effort they are putting in through their breathing and you honestly don’t know if they are going to be able to hang on or not.”


Another regular pacer is Paul Conradie, who says the sport has given him so much over the years, so pacing is just a tiny bit that he can give back. “I remember one year they asked for a fast bus at the Gun Run Half Marathon and I volunteered to take the 1:30 bus. It wasn’t easy but we made it, and one lady just made it with a PB that day. What a proud moment that was! My most enjoyable moment is post-race, when hugs, handshakes and thank you’s are coming my way, and often PB’s are also in the mix.”

However, sometimes it doesn’t quite go to plan, as Wilby Steenkamp, another founder member of the group, can attest. “My worst nightmare happened in 2007 when I paced the Two Oceans sub-7:00 bus along with Clem Simpson and Elizka Hendrikse. I was 100% on time at the marathon mark and told the other two that I would sweep up Constantia Neck. At the summit I started to cramp and knew I was dehydrated, so with only 3km to go I told the group of 11 runners with me that they must just stick to their guns and they will be OK. I walked the last 3km and finished in 7:06, but waiting for me at the Coke stand was the group – all of them finished between 6:57 and 6:58. I know I made the difference to those novice athletes that day.”