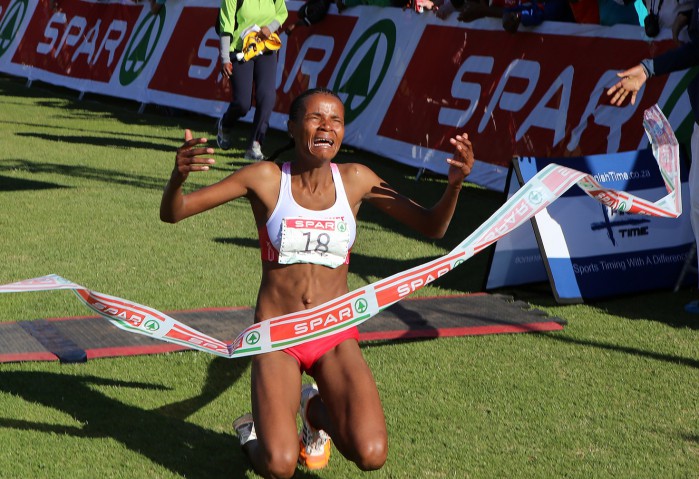 Transnet runner Lebogang Phalula registered her first SPAR Women’s 10km victory since 2008 when she beat a very strong field to win the 25th Durban Challenge in 33.06 minutes on Sunday.
Rutendo Nyahora (Nedbank) was second in 33.41, followed closely by Rene Kalmer (Modern Athlete) in 33.49.

The race started at a very fast pace, with Irvette van Zyl, who recently ran the third fastest time by a South African woman, taking the early lead. She was in a pack that included Phalula, her twin sister, Diana-Lebo, and the defending champion, Mapaseka Makhanya.

They ran in a group for the first three kilometres, when the Phalula sisters broke away. By five kilometres, they were well ahead of the pack, with Lebogang taking the lead over Diana-Lebo, who is the front-runner in the SPAR Grand Prix series.

“I could see my sister was struggling. She has a bit of a hamstring injury and eventually she told me to go and win the race for her,” said Lebogang, who broke down in tears after crossing the finish line. “I needed to win this race to prove myself,” she said. “I’ve had problems after I tested positive for a banned stimulant in Pretoria, but I’m now running clean and proud.”

Nyahora and Kalmer started slower than the leading pack, but gradually began to reel them in. Van Zyl dropped back, as did Makhanya. “I had a good race,” said Nyahora. “Rene (Kalmer) and I ran together from about three kilometres. She was pushing me, and I felt stronger as the race went on. The others started too fast for me, but Rene and I worked well together. We caught Irvette (Van Zyl) first, then Mapaseka (Makhanya) and then we passed Lebo.

“I passed Rene with about 800 metres to go.” Kalmer said she was very happy with her podium finish. “It was a very strong field, and I knew it was going to be a very fast start. I just stuck to my own game plan, and it worked. “I knew there would be a lot of pressure on Irvette because of her very fast time two weeks ago, and the Phalula sisters were also under pressure. But there was no pressure on me.”

Diana-Lebo finished fourth, Van Zyl fifth and Makhanya sixth. The top runners will all be in action again in a week’s time, when they run the Pretoria leg of the SPAR Challenge series, which will be run at SuperSport Park in Centurion on Saturday afternoon. More than 14 000 women took part in the 10km Challenge and the 5km Fun Run.