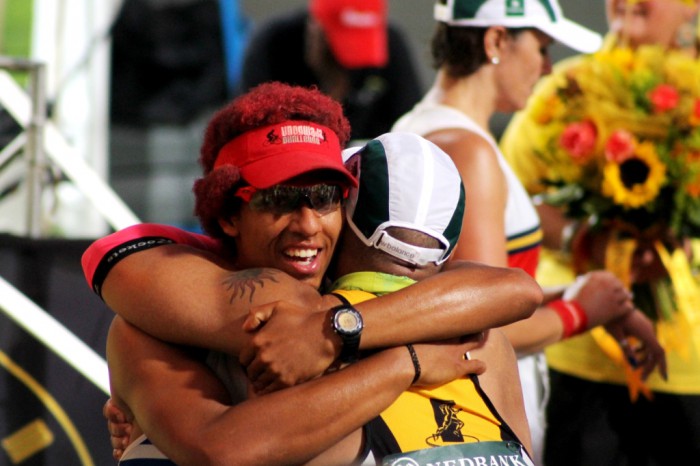 The Comrades Marathon Association (CMA) launched its campaign for the 90th Comrades Marathon today (Thursday, 14 August 2014). Members of the media along with South Africa’s top runners, sporting personalities and stakeholders converged on Johannesburg to be part of the celebratory launch of the world’s biggest and oldest ultra-marathon.

The 2015 campaign is centered on the CMA’s vision of an all-inclusive Comrades Marathon, with the slogan: ‘Be Part of It – Bamba Iqhaza’. CMA General Manager, Chris Bruwer who unveiled the campaign says, ‘We invite every Comrades runner, stakeholder, volunteer and supporter to be a part of this iconic race in one way or another.’


Bruwer adds, ‘There are numerous ways to get involved and participate in the camaraderie while uniting the nation through this iconic event. Please visit our website www.comrades.com to see how you can be a part of it.’


The 90th edition of the race will be run on Sunday, 31 May 2015. The ‘up-run’ will start at the Durban City Hall at 05h30 and end 12 hours later at the Oval Cricket Stadium in Pietermaritzburg, covering a distance of 87km.


1 September 2014 is the opening date for entries into the 2015 Comrades Marathon. The entry period will close on 30 November 2014 or as soon as the special entry cap of 23,000 has been reached. Prospective entrants are encouraged to get their entries in early so as to avoid disappointment.

Entry fees for the 2015 Comrades Marathon are as follows:

Runners can enter as follows:

Entry forms will be available at local running clubs, provincial sporting federations and the CMA; as well as selected qualifying races which the Comrades Team will be attending from September to November.

Race Director Rowyn James says, ‘The reason for this is two-fold. We want to encourage runners to be fit and healthy for Race Day. Further, we want to support all other road-running races in the country, especially the Comrades Marathon qualifying races by driving Comrades runners to participate in those running events.’

In a first for South African road-running, R1.5-million is up for grabs to the First Man and Woman respectively who break the current male and female up-run records thereby making the Comrades Marathon by far the most lucrative race on the local athletics scene. Leonid Shvetsov holds the male up-run record of 5:24:47 for his 2008 win while Elena Nurgalieva’s 2006 victory in a time of 6:09:24 stands as the female up-run record.

The first man and woman to cross the finish line will receive R375,000 each. The total prize money for the 2015 Comrades Marathon is R2.600,000; in addition to the respective R1.5-million incentives for the man and woman should they break the record.

CMA Chairman, Macdonald Chitja says: ‘We are pleased to unveil our 2015 Comrades Marathon campaign and invite the nation to be a part of it. The 90th edition of this world-famous ultra-marathon promises to be the best one yet.’