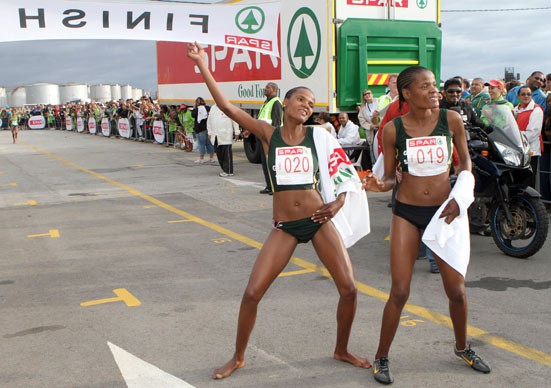 29 Aug 201417 May 2019 Modern AthleteFeatures
Share
Tweet
0 Shares
After years as a formidable duo in South African athletics, clinching results on track, cross-country and road, Lebo and Lebogang Phalula are posting even better performances in 2014. Modern Athlete chats to the twins about their mission to go down in SA history as the fastest around.
MA: How does running affect your relationship?
Lebo: Well, I wouldn't be running without my sister. I was into soccer and drama at school in Soweto, so when she qualified for the Commonwealth Youth Games in Poland, I wanted to try myself. She was my first running role model.
Lebogang: Looking at last year, when I was struggling with performances coming off maternity leave, Lebo was always helping me and she knew that I'd be back. With Lebo in Pretoria and me in Soweto, we don't see each other as often, but we constantly talk. I'll say 'Lebo, I did my 1000m in this time, so you better watch out, because I'm running at your peak!'
MA: Lebogang, you've had to juggle being a new mom recently while getting back into training?
Lebogang: It's a huge step knowing you need to train and find a nanny. So Lebo, my mother, my brothers, my husband all help. I've made a schedule – when I have to feed him, when to run. Lebo is always there for me and I'm her support. Some people were happy because we weren't racing together, but now double trouble is back!
Lebo: My sister is my Dr Phil. We share so much, so it was different when she wasn't competing.
MA: It seems like your comeback is going well!
Lebogang: I surprised everyone in the Spar Port Elizabeth race. Lebo told me to relax but there was going to be none of that! She jumped when she saw me finish sixth and made me feel like I won it. Throughout my pregnancy and today, Lebo is there. She is like my second husband and constant support. That's why I've come back so strong now. It's not my baby – it's our baby.
Lebo: Our boy loves running, too. He goes, 'On your marks, set, go!' and runs all over the house. But we're set on him being our Chad le Clos! When Lebo finished sixth, I knew she was on track and coming back strong! That and her win at the Totalsports Ladies Race in Jo'burg. I'm so happy for her.
MA: Will you ever consider the longer races?
Lebo: For now, we're looking at the 1500m and 5000m. I will only move to the marathon once I do what I want to with my current distances, and we are already planning for Rio 2016.
Lebogang: I have the belief of competing at a top level in the 800m against the likes of Caster Semenya to break a South African record. Some people are pushing us to run the marathon, but it's not our time yet. I want to be in the top five in the world at cross-country and on the track… my 10km races are just for fun.
MA: Lebo, you’ve won some of this year's Spar Ladies races, so it seems the 10km races aren't just fun…
Lebo: I'm into road for this year and the Spar Ladies races have been a great way to show my hard work. I decided to switch to another coach who helped me with endurance and speed and to run a PB, but my 32:27 in Port Elizabeth didn't come easily. My training now is not for sissies – it's geared to international standards so I can compete on the highest level.
MA: What would you tell young athletes who want to reach the level you're at?
Lebo: It's about never losing hope, because you never know what could happen – and be drug-free, because they can destroy your career.
Lebogang: They almost destroyed mine. Back in 2011, a manager that I trusted gave me pills when I was sick before a race, and I then finished third and was so happy. There were anti-doping tests at the finish and I didn't think anything of it, because I believed that I was clean, but days later I received a call telling me that they found methylhexaneamine, and I had to go to a hearing. Richard Meyer, who is like a father to us and has helped us throughout our careers, helped me at the hearing.
Eventually, Lebo remembered the pills the manager gave me. I still had some and they tested positive for that exact substance. That manager did not pitch for the hearing and was eventually suspended for seven years. Fortunately I was only suspended for three months. God was there and knew that I was innocent. If I'm crossing that finish line, I'm crossing it clean. So know what you're taking!
MA: You two have also travelled the world as runners. Any highlights that stand out?
Lebo: It was in Poland back in 2009, when my sister and I competed for SA in cross-country and were in the form of our lives. I was in the top-20 and my sister was top-15. We challenged those Kenyans and Ethiopians!
MA: If you could have any characteristic that your sister has, what would it be?
Lebo: I would love to have her heart, because she doesn't give up easily. She has a heart of a lion.
Lebogang: No, I wish I had her heart, because whatever you ask, she gives. I'll say that Lebo has a heart of a giraffe, because she's so tall!
Lebo: No, it would be better if you said a cheetah!