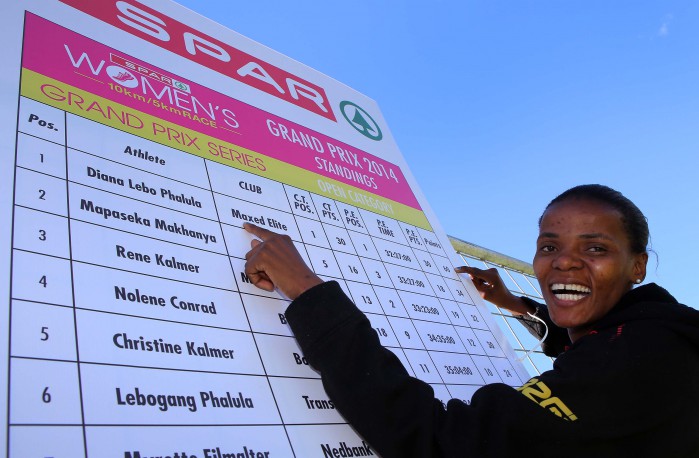 With two races to go in the SPAR Grand Prix Series, Diana-Lebo Phalula still appears to have the title in her grasp, with a commanding 27 point lead over her nearest rival.

Phalula finished fourth in the Durban SPAR Women’s 10km Challenge on Sunday, but her dominant performance in the first two races of the year, in Cape Town and Port Elizabeth, where she achieved maximum Grand Prix points by winning both in record times, mean that she has collected a total of 77 points.

Phalula’s twin sister, Lebogang, won the Durban race after she and Diana-Lebo had led for most of the way. With about two kilometres to go, Diana-Lebo, who had a hamstring strain, told her sister to go without her and Lebogang raced away to win her first Challenge title since 2008. She broke down in tears as she crossed the line, sobbing that she had won the race for her sister.

Lebogang Phalula’s win on Sunday has moved her from sixth to fourth position on the log, with 39 points, nine ahead of Nolene Conrad and Christine Kalmer, who have 30 points each.
Saturday’s Challenge race in Pretoria appears likely to be as much of a thriller as the Durban race. The top runners will all be in action, and with just one race after that, they will be going all out to accumulate as many points as possible. Irvette van Zyl, two-times Grand Prix winner, had a disappointing run in Durban, finishing in fifth place after a scintillating run in Stellenbosch earlier in August, where she won the Totalsports women’s 10km in 32.20 minutes. She has won the Pretoria race on several occasions, and she has let it be known that she intends to win this one. The Phalula twins are also both determined to win, and Rene Kalmer can never be ruled out, while last year’s winner, Makhanya, has a point to prove.

In the club competition, Boxer are well in the lead with 165 points, followed by Maxed Elite, with 78. Nedbank and Transnet are in joint third position, with 77 points each.