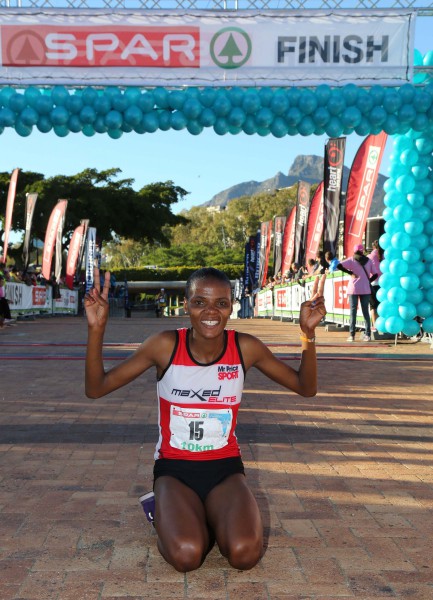 Barefoot runner Diana-Lebo Phalula’s record-breaking victory at the Spar Women’s 10km Challenge at Pollock Beach in Port Elizabeth on Saturday has given her a massive headstart in this year’s Spar Grand Prix.

Maxed Elite’s Phalula, who became the fourth-fastest South African runner when she crossed the finishing line in 32.27 minutes, also won the Cape Town leg in record time. With bonus points for beating the previous year’s time in both races, she now has a massive 60 points on the leaderboard – 26 ahead of her nearest rival, Mapaseka Makhanya.

Kalmer’s sister Christine is in fifth position, with 24 points, and Phalula’s sister Lebogang is five points behind her, in sixth place.

The Grand Prix rewards the top runners competing in the five Challenge races, which are held around South Africa. The winner will receive a Nissan Micra, and the runner-up R30 000. There are also prizes on offer to the top runners in the various age categories.

Only South Africans are eligible for Grand Prix points, so foreign runners like Ethiopians Hunduma Gemeda and Chelity Asefe, and Zimbabwe’s Rutendo Nyahora are not eligible for Grand Prix points.
After years of Nedbank dominance on the club leaderboard, the Green Team is playing second fiddle to Boxer, who top the club leaderboard with 118 points. Nedbank is in second place, with 91 points and Maxed Elite are in third, with 61 points.

While Phalula has said she is determined to run all five Challenge races so that she can drive away in a brand new car, her immediate focus will be on qualifying for the Commonwealth Games in Glasgow in July in the 5000m and 800m events. Makhanya, who won her debut marathon last year, will also be turning her attention to road races in Europe, while Rene Kalmer is heading for the United States for some road races there.

The next Spar Challenge race takes place in Durban on August 24.