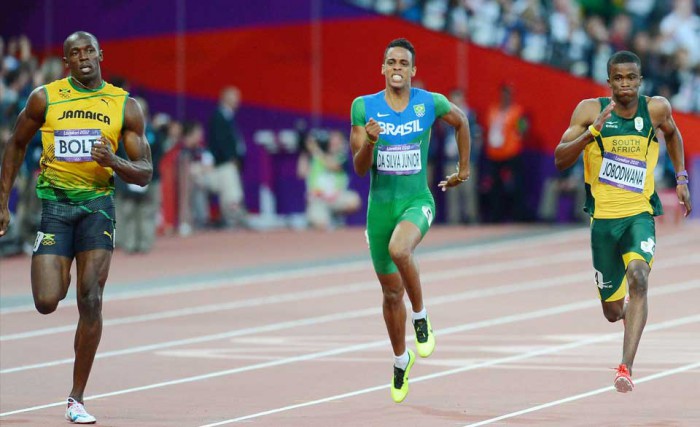 In 2012 SA sprint sensation Anaso Jobodwana shot to fame as he made the final showdown in the men’s 200m at the London Olympics, setting a PB of 20.27 in the semi-final as he gave World Record-holder Usain Bolt a run for his money. A year later, the speedster from the Eastern Cape grabbed a double victory in the 100m and 200m at the World Student Games in Kazan, Russia, then made the final of the World Champs 200m in Moscow. We caught up with him to chat about training in the USA and building confidence for future podium spots.

MA: Where did your love of sprinting begin?
AJ: I tried every sport at school, running in inter-high events that only happened about once a year. In 2008 when I was in grade 10, everything changed and I took my running more seriously. A year later, I was fourth in the 200m and sixth in the 100m at the SA Youth Champs. I knew I was on form and at the end of 2009, getting introduced to a coach and various training programmes, I knew that I could really follow-through with it. I went on to win the SA Schools 200m title in 2010, but then picked up quite a bad hamstring injury, partly leaving me out of the 2011 season.

MA: But you qualified and got that spot for London. How trying was it being on the sidelines in that period?
AJ: Pretty frustrating! I remember the federation requested athletes to qualify again before the World Junior Champs and I competed, having already picked up the injury in April that year. I rushed the rehab process – more than I should have – and it took me more time to recover afterwards. So in 2011, I knew I had to look after myself and start to recover in my own time. My confidence was low – I even remember telling my coach that maybe I wasn’t cut out for it – but in late 2011, I moved to Jackson State University in Mississippi to study physiotherapy and focus on my athletics, so I put that behind me.

MA: Last year, you clocked 20.13, the fastest 200m in the National Collegiate Athletic Association, and ran a wind-assisted 20.00 at the World Student Champs, where you also matched your 100m PB of 10.10. Has training in the USA helped you, and how do you balance training and competition with your studies?
AJ: It’s great because the coaches and teammates push you in training and they’re quick, so it makes you work that little bit extra. There are regular track meets in the States and there’s another level of competitiveness. Also, at the end of 2011, introducing strength work helped my recovery and fitting in three weight sessions a week definitely helped me push out the blocks faster. We train Monday to Saturday with Sundays off for sleeping in! We also prioritise nutrition in the time leading up to competing – that’s our fuel and we follow that up with adequate amounts of carbs and high-protein for quicker recovery while getting enough sleep.

Balancing everything as a student is manageable for me. Training definitely puts me under more stress, but luckily we’re given a three-month break from school to focus solely on competition. Then you can get your head in the right space.

MA: You’re based in Florida at the moment but visiting SA for a while. Why are you back and what does this year hold for you?
AJ: I’m home to get some rehab sessions done, because I picked up two hernias and I’m waiting for results from my doctor before getting into training again. It’s great to have support from family and friends here – they always check up on how I’m doing and they’re very interested in watching me when they can. As for 2014, I’m set on getting out of the blocks quicker, steadily working on my times and technique, and continually learning new things about my body. That will only translate into the results I want. Obviously there is African Champs and the Commonwealth Games to look forward to later this year!

MA: In April, Simon Magakwe became the first South African to break the sub-10-second barrier, clocking 9.98 in the 100m at the SA Champs. Do you think you can go faster?
AJ: I’m not too sure! Only time will tell. I’m just working hard to come back and then I’m always thinking about Rio 2016, which is great, because I never even thought I’d make it to London, but there I was, running against Usain Bolt and other stars. It was just an absolute highlight!