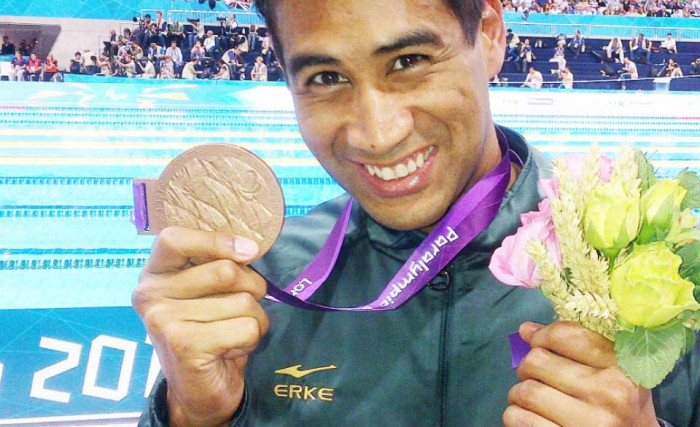 In 2006 Achmat ‘Sharkboy’ Hassiem was participating in life-saving training off Muizenberg Beach in Cape Town when a 4.5-metre Great White Shark attacked him. Despite losing most of his lower right leg, Achmat’s indomitable spirit saw him return to sport, going on to win a Paralympic bronze medal in swimming at the 2012 London Olympics, as well as running and playing other sports.

I still remember it like it was yesterday. It was a Sunday morning and I went to the beach with my younger brother, Tariq, to practise for the upcoming lifesaving exams. After deciding that Nick, Tariq and I would be the patients and the others would be the rescuers in the rubber duck, Nick was dropped in fairly shallow water, I jumped out at head height around 50 metres out, and my brother went deeper.

I watched them pick up Nick, then I caught something out of the corner of my eye, a black shadow, and this big fin broke the water. The shark was heading towards my brother, so I screamed for the rubber duck to get out to him. They didn’t understand, so I started drumming on the water, to draw the shark’s attention. Immediately it spun and came towards me, and then the fin disappeared. I knew that sharks like to attack from the bottom, but it just bumped me and its tail whacked me. I lost sight of it, but could see my brother was screaming something at me. Then I saw it coming back, its mouth open. I put my hand on the shark’s head and tried to push myself on top of it, but I couldn’t swing my right leg over… then I saw half of it was in the shark’s mouth.


It started shaking me violently; it was terrifying, but there was no pain. I was in absolute shock… It pulled me under, then headed towards deeper water. I was still trying to get out of the shark’s mouth, but I was getting short of breath and I remember thinking, why don’t I just let myself drown – that would be better than what the shark would do to me. Then I decided, no, fight! I hit the shark with my fists. It was like hitting a tank wrapped in sandpaper and soon I had no skin on my knuckles, but I had one good leg left and I tried to kick the shark. Then it shook me again, so hard that there was this loud cracking sound.

I swam for the surface and stuck my hand out of the water, and that’s when I saw my brother in the rubber duck. He grabbed me and as he pulled me into the boat, this massive 4½-metre shark came back and hit the side of the boat. It absolutely dwarfed the boat! My brother jumped on me to hold me, closed my eyes so I couldn’t see what had happened, and said that everything was going to be okay. And still I felt no pain.

I was airlifted to hospital and when I awoke in intensive care, the first thing I saw was my brother crying. He said, ‘Thank you for saving my life,’ then he said ‘Do you know what happened? Look under the blanket.’ I was scared, but I looked, and saw my leg was gone – that was the first moment I really knew what had happened. I’d always played sport and dreamt of representing my country some day, and I went into this great depression.


Then one day Natalie du Toit came to visit. She suggested I get into Paralympic swimming, and I soon realised the massive opportunity that disabled sport offers. When I first heard I was going to represent my country it was everything to me. In Beijing I came ninth and I was so disappointed that I didn’t make the final, so in London I swam my heart out, and when I touched the wall and saw the block was lit up, it was one of the greatest moments of my life. My little secret is that I just imagine I’m in the ocean and I’ve got a 4½-metre shark at my feet. It’s definitely good motivation to swim fast!

Being a disabled person that was once able-bodied, I can say nothing has changed. I still go for regular runs, I still play cricket and soccer in the streets at night, and I carry on as I used to. Losing a leg is nothing compared to losing my brother, so I’m just trying to make the best of it. Today I travel all over the world to represent South Africa, and all because of a shark attack and a positive attitude. You have to grab the bull by the horns and live life – and I want to have a positive impact on the people around me.