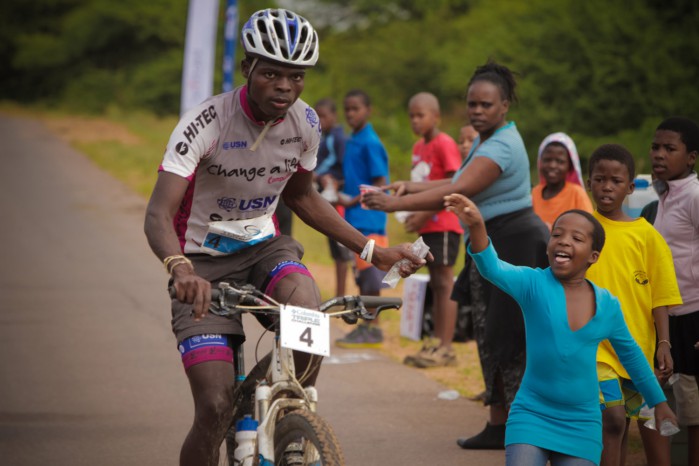 The Multisport Challenge – considered to be one of South Africa’s toughest endurance races – saw competitors first take on a 20km trail run from Pietermaritzburg to Camperdown, followed by a 53km mountain bike race from Camperdown through the Valley of a 1000 Hills to Inanda Dam, and finally a 18km canoe race around Inanda Dam (which included two portages).

Lance Kime, the 2013 Dusi Canoe Marathon Singles winner, claimed his first victory in the gruelling 93.6km Multisport Ultra in a time of 5h42m36 but faced his toughest competition in the form of Nhlanhla Cele, winner of the 2011 and 2012 Multisport Challenge. In the end though it was Lance Kime first in 5h42m36s with his friend and training partner Andrew Houston, second in 5h47m16s, and Nhlanhla Cele in third in 6hr11m56s.

In the women’s Multisport race, Gauteng athlete, Jane Swarbreck, who narrowly missed podium in 2011, raced to victory this year in a time of 7h29m50s. In second place was Jessica Dicks (8h56m2s), with Jane’s sister, Kate Swarbreck in third.

The 80.6km Multicross Challenge, following the same format of the Multisport but replaced the paddle with a 7km trail run through the Msinsi Inanda Dam Reserve and valley-bottom. This event saw the most heated action of the day, when John Ntuli (the 2011 Multicross winner) finished just over a minute ahead of Brand du Plessis (Multiple South African Duathlon champion) in a time of 4h15m07s. In third position was Sizwe Mkhasibe in 4h24m28s. A cracking pace!

In the women’s Multicross, Jeannie Bomford-Dreyer raced to her 5th victory, equalling that of Columbia Triple Challenge legend, Dan Hugo. Dreyer won well ahead in a time of 4hr50m41s with Sarah Gray in second place in 6hr05m24s and Terry Pellow-Jarman in 7hr07m34s. Dreyer has now won three Triple Challenge Multisport and two Multicross races making her the most successful Triple Challenge female of all time.

The 53km MTB race route from Camperdown to Inanda Dam was equally spectacular as it was challenging with breath-taking views through the heart of the Valley of a 1000 Hills as rider’s dropped down into the majestic valley.

The first half of the route was relatively easy but the second half came with a couple of tough portage sections, some tricky single-track and many lung-busting hills, which, combined with some heat and humidity on the day, made for an energy draining but exhilarating mountain biking race.

Two-time MTB Challenge winner, Andrew Hill, claimed his third title in a blistering time of 1h58m35s setting a new record of completing the race in less than 2 hours. He was closely followed by Dusi-legend, Martin Dreyer’s, ‘Change a Life’ Programme athlete, Mboneni Ngcobo, who crossed the line in 2h05m24s, with Sithembiso Masango in third in a time of 2h06m30s.

Alexandra Mapstone who is in matric and only 17 years old, was the first women to cross the finish line in an extraordinary fast time of 2hr40m16s, followed by Amanda Hawke (2h45m19s) and Karen Thomson (2h51m40s).

The 12th Columbia Triple Challenge saw a new event added to the line-up – the SUP Challenge. Stand up Paddle, which originates from Hawaii, is an offshoot of surfing where paddlers stand on their board and paddle.

At the 2014 Triple Challenge there were two SUP options – a 4km and an 8 km race – that saw competitors race round Inanda Dam.
Stephen Lawson won the inaugural event in a time of 33m12s.

Columbia Sportswear, the new title sponsor for the Triple Challenge, has added enormous appeal and value to the event this year. As an industry leader in outdoor apparel, the clothing brand is passionate about trying stuff outdoors and therefore makes an ideal partner to the thousands of would-be and professional multisport, multi-cross, MTB, trail, and road runners, and paddlers in South Africa.
________________________________________
2014 Columbia Triple Challenge Results: