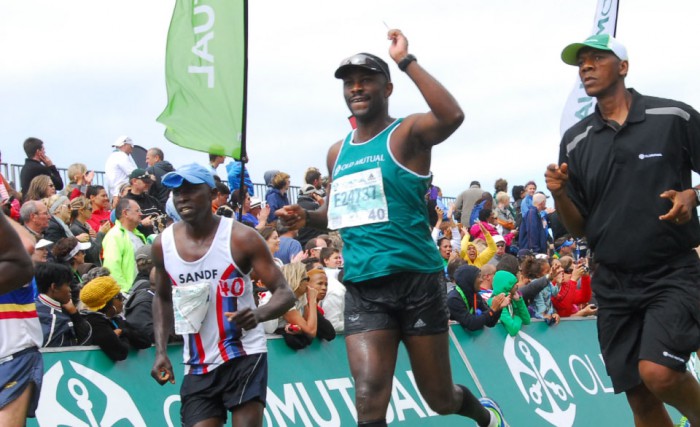 Despite a demanding schedule, finding time to run is a daily priority for Ralph Mupita, CEO of Old Mutual Emerging Markets, and he also makes a point of regularly turning out in his company’s flagship sponsorship event, the Old Mutual Two Oceans Marathon

Modern Athlete: You’ve run three Two Oceans ultras in the last three years, to go with three earlier runs in the half marathon. Tell me about your running background.

Ralph Mupita: I was a sprinter at school and ran the 100m in 10.8 seconds, so long distance in those days was 400m. I was also an avid rugby player and cricketer, and played national schools cricket for Zimbabwe as a left arm fast bowler, where I enjoyed giving opening batsmen a hard time. I only got to distance running pretty late, when I ran my first Old Mutual Two Oceans Half Marathon in 2002. I haven’t looked back since!

MA: What does running and being fit mean to you?

RM: A healthy mind benefits much from a healthy, strong body, and vice versa, so running helps me be a better person and better executive in my company. Executive roles come with a lot of inherent stress, and running helps a lot to manage and reduce that stress. When I can’t solve a problem or have a difficult issue to sort out, I mentally park it until I get a chance to run. Often, during or after a run, the issue is solved.

MA: How do you fit exercise into your busy schedule?


RM: My work takes me to many great places in the world, and I always pack my running shoes when I travel. My favourite places to run – outside of South Africa – are New York, Barcelona, Paris and Boston. Most cities I travel to have good running routes, but in Mumbai, Beijing and Bogota I only run in the gym. Mumbai’s streets aren’t safe for running, in Beijing the pollution is an issue, and in Bogota the altitude gets to you!


RM: I have the tremendous privilege of leading the Old Mutual business in South Africa and in other emerging markets. We now have operations in eight African countries and three Latin American countries, as well as joint ventures in India and China. The business involves looking after people’s long-term savings and giving them peace of mind about the future, and we look after eight million customers, managing more than R850 billion of assets on their behalf. It’s a massive responsibility and privilege to be the custodians of national savings and enablers of individual dreams and aspirations.

MA: So where do you see global economics heading? In other words, will the price of running shoes keep climbing?


RM: Anyone who tells you they know how global macro-economic forces will play out is brave! That said, what is clear is that in the short term we are likely to see faster growth in the developed countries than we have seen over the last five years, particularly in the US, while emerging markets will continue to grow faster than developed countries, but at a slower rate than before. There will be a bit more volatility in the currencies, equity and bond markets of emerging markets in the short term – but the long-term growth prospects of emerging markets are still solid. So yes, running shoe prices will go up, unfortunately! Labour prices and rubber prices, to name only two input factors, are only going up. But running will continue to be a great investment – in both your physical health and mental wellbeing!

MA: Old Mutual is a long-standing sponsor of the Two Oceans. How does it feel to run the event while also being part of the title sponsor?


RM: Long-distance running has many parallels with the Old Mutual business, and also with saving and investing. It’s about the long term, pacing yourself, being patient and keeping to your plan, not being distracted. It’s also about people and connectedness. Personally, I love running the Old Mutual Two Oceans Marathon – it has to be the most scenic and beautiful run in the world, and the support from the Cape locals is amazing.

Running is an important part of Old Mutual’s sponsorship portfolio because it remains a popular and growing sport in South Africa. It is open to people from all walks of life and hence it provides us with opportunities to connect with a diverse array of participants, supporters, customers and stakeholders. We are also proud to support something that creates a virtuous circle: Running helps people to be fit and healthy, it helps people to realise their goals, it creates a community of people who strive to do great things – and our brand is strongly aligned to this purpose.