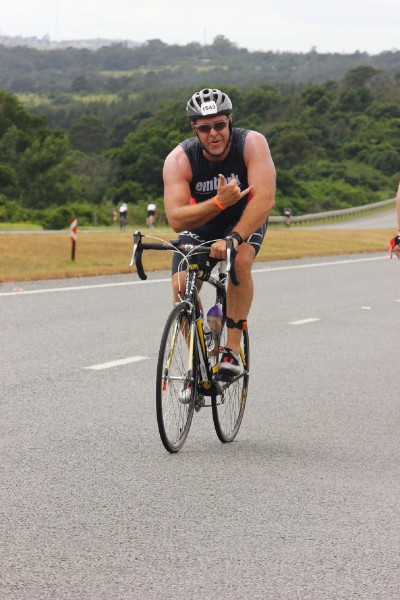 Francois Jacobs (43) of Centurion will be competing in the Discovery World Triathlon Cape Town from 26 to 27 April at the V&A Waterfront. This is the first time that a leg of the ITU World Triathlon Series will be hosted on the continent and the first time Jacobs, who has been blind from birth, will be competing with his guide Mike Fannin. The International Triathlon Union made the announcement in November 2013 that Cape Town and Chicago in the United States of America would make their debut at the 2014 series.

Jacobs, a successful business analyst at a leading financial services company, enjoys competing in triathlon events, accomplishing an impressive list of sporting achievements. Jacobs says: “Cycling used to be my strongest discipline, but I’m enjoying the swim more and more. Nothing quite gets to the vitality of an open water sea swim!” Jacobs has finished five Ironman events, including the 70.3 Ironman and Ironman Western Australia, the Comrades Marathon and several other Olympic distance events.


Jacobs will be guided by Mike Fannin (41) of Cape Town, who runs a division of an investment advisory business. Born in Durban and raised in Port Elizabeth, Fannin has been actively participating in triathlon since August 2013. This will be their first triathlon that they tackle as a team. “I was asked by coach Steve Attwel of Embark Training to help Francois. I enjoy the swimming part the most and have done about five standard triathlons, one half Ironman and one Ironman. Sporting wise, I’m proudest of completing the Ironman.”

Jacobs continues: “I do recreational cycling, and two months ago I took up kick-boxing to increase my overall fitness. When a friend pitched the kickboxing idea, I told her that she’s mad, but after my personal trainer at Virgin Active Centurion said yes, I had my first session and I was totally hooked.” Fannin adds: “I lift weights occasionally, and am starting mountain biking. I also do some surfski paddling.”


While Jacobs often participates to raise support for the Sabona Sonke Foundation, the organisation that works to avert preventable blindness in the Eastern Cape, he will be competing at the Cape Town World Triathlon to thank Virgin Active Health Clubs for their backing. “I’m doing it in appreciation for their tremendous support getting me in my current state of fitness. My goals for 2014 is to lose another stubborn 7 kilograms,” says Jacobs. “I want to have a good finish at the Momentum 94.7 Cycle Challenge and pursue a personal best at the Eleven Global Sun City. I hope to find a guide to make Ironman 2015 my best ever.”


Fannin would like to do more of the same during this year. “I love doing triathlon and multisport. I just want to keep doing as many events as possible whilst having fun.”


Jacobs considers Bruce Fordyce, multiple Comrades Marathon titleholder and motivational speaker as well as Natascha Badmann, Triathlete champion, as his sources of inspiration. Says Jacobs: “I was very disappointed by my finish time at the 2012 SA Ironman. I worked so hard towards my personal best time. During the awards night Badmann shared how she overcome serious injury by making a conscious decision to try, and try again, until she came out on top. It was exactly what I needed at the time, and those powerful words will stay with me forever”.


Fannin concludes that Lewis Pugh is a big hero of his. “I’ve been privileged to hear him speak a few times. My family also inspire me, as they’ve always been so supportive, as well as my faith.”