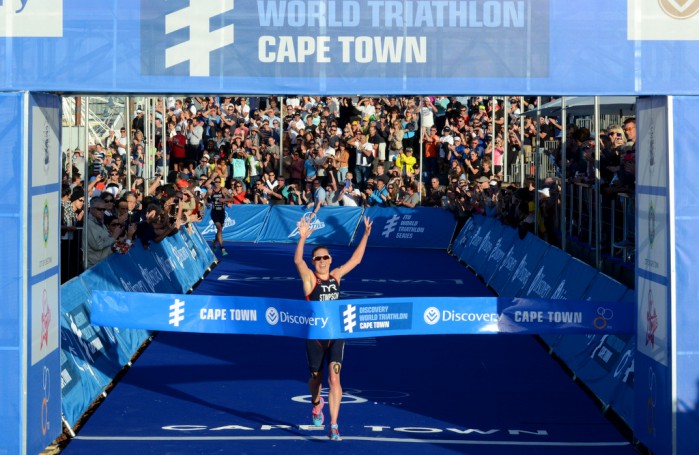 Great Britain’s Jodie Stimpson asserted her status as the female triathlete to beat in 2014, collecting her second consecutive World Triathlon Series win as the series made its debut in Africa on Saturday.

After being part of a 12-strong lead group on the bike that left T2 just over two minutes up on the chase, Stimpson hit the run course in Cape Town with intent. While it initially looked like it would be a repeat of Auckland, where Stimpson was not headed across the 10km, Helen Jenkins had other ideas. The two-time ITU World Champion caught Stimpson at the halfway mark, before a frenzied final five kilometres where the lead changed multiple times. But Stimpson pulled out another gear in the final 500m as the blue carpet came into sight, and stormed home for her second win of 2014.

““When Helen passed me it was just all about trying to hang on, I was going through a bad bit, I had a stitch and I was just like, come on, just hold on to Helen,” Stimpson said. “I tried to break her going onto the last lap and then I couldn’t, so I just sat behind and I gave it all I’ve got and managed to get on top today.”

While Stimpson and Jenkins’ battle rightly headlined Cape Town, the USA’s Gwen Jorgensen almost stole the show with another breath-taking run. Jorgensen was part of the chase that left the second transition 2 minutes and 12 seconds behind the leaders, but the American speedster did not let that deter her as she blew through every other member of the lead group – including Sarah Groff in the final kilometers – to take her place on the podium with bronze.

The swim was shortened to 750m in Cape Town due to low water temperatures at the V&A Waterfront and Carolina Routier and Lucy Hall led the field out of the water and onto the bike. In a chaotic first lap, a group of 12 formed including three of Hall’s British teammates, Helen Jenkins, Jodie Stimpson and Vicky Holland, as well as Sarah Groff, Yuka Sato, Kirsten Sweetland, Anja Knapp, Ainhoa Murua, Pamela Oliveira and South Africa’s own Marie Rabie, in her first WTS race since 2010.

What began as a 25-second lead, quickly amounted to more than a minute halfway through the bike thanks to the experience and organisation of the lead pack. Jenkins may have missed the 2012 season, but the talent that carried her to two world championship titles was alive and back in action.

Despite being led by cycling cyclone Anne Haug, the group just could not muster up the speed to close in on the dazzling dozen.

At the end of the sixth lap, the third chase pack bridged up, but the added muscle did little to increase the group’s tempo. The leaders flew into T2 with a 2 minute and 12 second lead and got to work pushing the pace to ward off the powerful Haug and Jorgensen behind them.

Continuing on her stellar form from Auckland, Stimpson went straight to the front. While Holland stuck on her shoulder initially, she fell back and it seemed like Stimpson had her second straight victory all but wrapped up. But that was not in Helen Jenkins plan, as she steadily reeled Stimpson back in, catching her at the halfway point of the run. From there the pair’s intensity only increased, with multiple lead changes before Stimpson gained the upper hand in the final 500m.

The win means that Stimpson moves further ahead in the 2014 Threadneedle rankings, after two rounds of the World Triathlon Series. Jenkins sits in second, while Anne Haug’s strong sixth place – after leaving T2 in the same place as Jorgensen – means she sits in third just ahead of Groff, who has now recorded two consecutive top-5 finishes to start the 2014 season. Jorgensen is currently in fifth place.

African Triathlon Champion Gillian Sanders finished in fifteenth place. Says Sanders: “It was so tough out there. I was in the second bike pack and it was mostly a day of catching up. I realised that I’d have to run really hard and I’m happy with my result. I’m a proud South African today. You can’t beat this venue. Discovery World Triathlon Cape Town was so awesome and everybody loved it. I think it bodes well for the future of this event.”
Compatriot Mari Rabie finished 27th in a 46-strong field: “My expectations weren’t high. It’s been two years since I’ve competed as I’ve been focusing on my studies. I’ve only been training for four months and I knew the run would be the big challenge. I’m somewhat disappointed with my swim because I’m usually a strong swimmer. I’m so happy though that I have competed today and it’s great to be back!”