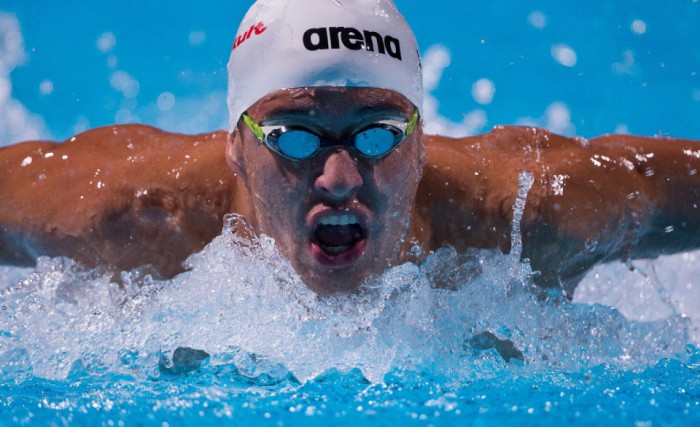 
Thanks to his winning ways in the pool, Olympic, World and Commonwealth champ Chad Le Clos has become one of South Africa’s brightest sporting heroes. This month, he’s going all out for a record eight titles at nationals, with the Commonwealth Games and Rio 2016 in his long-term sights.

Who can forget one of the iconic South African moments from the London 2012 Olympics: In the 200m butterfly final, a 20-year-old from Durban, Chad Le Clos, won the gold medal and beat the most decorated Olympian of all time, American Michael Phelps, and then Chad’s ecstatic father, Bert, won the hearts of the nation as well, thanks to gushing on emotionally about his “beautiful boy.” Coming back from London, Chad says the hype was overwhelming. “I felt like Justin Bieber, and it still hasn’t died down! There’s been great support. Swimming is a lonely sport, it’s just you out there, so it’s important to be appreciated.”

London really put him on the proverbial map, but Chad’s success in the pool actually began a few years earlier. In 2010 he brought home a gold, three silvers and a bronze medal from the Youth Olympics, as well as two golds, a silver and two bronze medals from the Commonwealth Games. The following year he won five golds and a silver at the All Africa Games. Then came 2012, bringing a gold and a silver from London to go with two World Champs golds and a silver. Next up was the 2013 World Champs in Barcelona, where Chad shortened his programme to focus on the butterfly events, his signature stroke. It paid off as he won gold in both the 100m (with a new SA record) and 200m. Chad has also twice won the Overall Swimming World Cup, in 2011 and 2013.


Chad’s drive to succeed in the pool actually stems from watching Michael Phelps bag six golds at the 2004 Olympics in Athens. Back then, aged eight, his only sessions in the pool came in Physical Education classes at school. However, his swimming ability soon shone through, and today he is one of the world’s foremost swimmers, but he remains humble about his achievements. “People expect me to win, but you can’t always be Superman. I just focus on what I have to do. I also watch my opponents on Youtube, because I want to keep learning, and see how I’ll match up. As a pro, you have to think outside the box.”

Having travelled the world, Chad says he is hard-pressed to choose a favourite race or meet. “I’m biased when it comes to places I’ve visited – the results stand out more than the venue. That’s because I don’t get to see any of the countries, I’m just in the pool doing my thing.” There’s little ‘downtime’ for the champ, with just 15 days off a year for short recovery. Along with interviews and obligations to sponsors, he puts in 10 training sessions a week, doing about 80 kays in the pool, or as Chad puts it, “Swimming the Comrades Marathon!”

He also fits in three gym sessions a week to work on his core and improve his stamina, but 80% of his training is in the water. Most Sundays are spent surfing with his brother. Apart from training, Chad remains loyal to his diet, having started using GNC Nutrition products three months ago, avoiding heavy supplements, and using whey protein for recovery as well as FutureLife after morning sessions.

MORE ON THE CARDS


This month, Chad is chasing eight wins at the SA Champs. “The most won is seven and it will be difficult, because the competition is tough, but it’s my stepping stone to the Commonwealth Games later this year, and obviously Rio 2016. My goal for London was any medal; my dream was gold. It might have been unrealistic, but if you’re not up to dreaming big, you won’t make it. There were occasions growing up that people told me I’m not good enough, but my parents were always in the crowd and guided me. I wouldn’t be here today without my sponsors, coach and family. I swim for myself, but I also do it for them.”