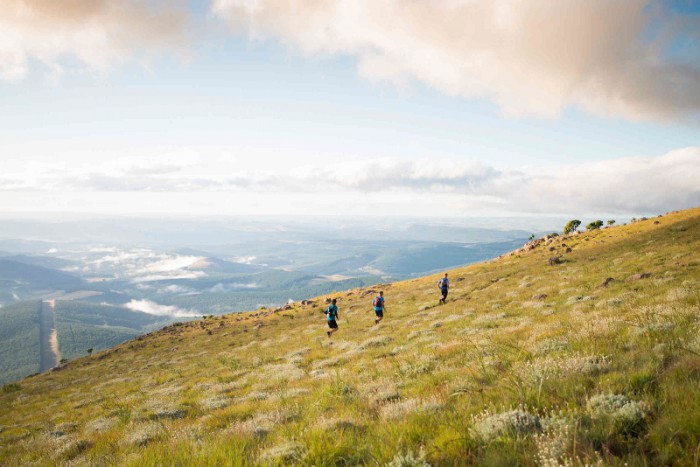 The South African Skyrunner® Series 2014 blasted off to an exciting start with the successful staging of the Ingeli Skymarathon® this weekend.

Dubbed “the green mamba of trail running” for the several nasty “bites” of ascent the route delivered, the 42km course through the Ingeli mountain range in Kwa-Zulu Natal covered 2 100m of vertical gain, making it one of the toughest races of this distance in the province.

“My race strategy was to start conservatively and then pick up the pace as I needed to, depending on the competition. I realised on the first climb that I was stronger than the other guys so I pushed hard and opened a gap. The course had a good mix of steep climbs and descents, and long runnable forest sections. It’s been a dream of mine for a long time to win a skyrunning race, so I’m very excited,” said Miya.

The ladies race was always going to be between Don-Wauchope and Zunckel, both strong climbers and both living at fairly high altitude in the foothills of the Berg region.

“I knew Tracy was going to be strong, she always is, particularly over longer distances. I was worried I had started out too fast, but I’ve been doing a lot of hill training, and felt very strong on the ups. I approached the long descent cautiously, and once I got into the forest I tried to relax and stride out. I had a great day and had legs all the way to the finish!” said an elated Don-Wauchope.

Miya’s and Don-Wauchope’s wins secure both runners entries for the 2014 Skyrunning World Championships to be held in June in Chamonix, France.

“I’m so excited to have the chance to compete in an international Skyrunning race and be able to show the world how capable I am as a runner,” said Miya.

Ingeli Skymarathon® race organiser Andrew Booth says the Ingeli Skymarathon® is unique.
“The Ingeli mountain has huge allure – it’s an uninhabited wilderness of grasslands, wetlands, rocks and trails, where proteas grow, and antelope and caracal roam wild. The race was an enormous success. The front end of the men’s field was particularly competitive – there was no room to slack for Lucky and he had to push hard the whole way.”