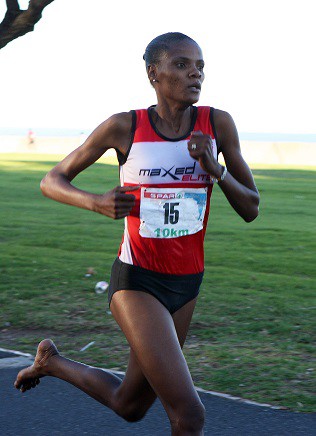 There’s a new name at the top of the 2014 SPAR Women’s 10km Challenge Grand Prix leaderboard.

Diana-Lebo Phalula (Maxed-Elite) has taken the first step towards claiming the keys to the Nissan Micra on offer to the winner of the SPAR Grand Prix after all five Challenge races have been run.

Phalula dominated the Cape Town race on Sunday and romped to victory in 33.03 minutes. Because her time was faster than last year’s winning time, she claimed an extra 10 points, and tops the leaderboard with 30 points. “I’m certainly hoping to run in all five races,” said Phalula in a post-race press conference. “I would love to win a car – that would certainly be very useful. I’m very motivated and I feel I am running well.”

Second on the leaderboard, with 18 points, is Nolene Conrad (Boxer), who finished the race in third place, behind Ethiopian Nedbank runner Hunduma Gemeda. 2013 Grand Prix champion Mapaseka Makhanya (Boxer), who came fifth, is in third position, with 16 points.

Modern Athlete’s Rene Kalmer, who has won the SPAR Grand Prix three times, is in fifth position, with 13 points, one behind her sister Christine (Boxer), who finished just ahead of her in the Cape Town race. The other multiple Grand Prix winner, Irvette van Zyl, did not compete in Cape Town because of an injury.

With four runners in the top 10, Boxer has taken the early lead in the club competition, with 68 points. Nedbank is in second place, with 43, followed by Maxed Elite with 30.