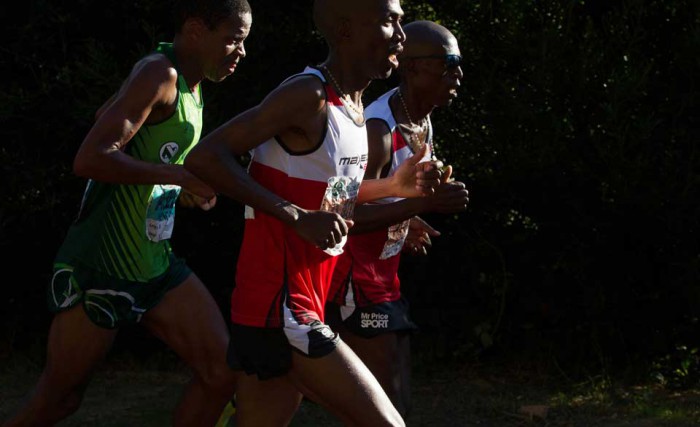 All eyes at this year’s Old Mutual Two Oceans Marathon were watching to see if anybody could break the elusive course records and claim the R1 million incentive, but come the end of the 56km ultra-marathon, with both records still intact, the talk was all about the superb run by 42-year-old Hendrick Ramaala in his first race beyond the marathon mark.

Cresting the monster climb at Constantia Nek in the leading group of three runners, along with Lebenya Nkoka and Masilo Matjiane from Lesotho, Hendrick Ramaala was very much in unknown territory. The 46km mark was behind him and ahead lay just 10km more, but his legs were beginning to suffer, and he could only watch as eventual winner Lebenya pulled away one kilometre later. A while later he lost second place to another Lesotho runner, Warinyane Lebopo, but clawed his way back to finish second in 3:11:33, less than two minutes behind the winner’s 3:09:52.

Understandably elated, Hendrick said afterwards that he really enjoyed the run, despite finding it hard towards the end. “I didn’t do enough mileage in preparation for the race and I struggled after 42km, but I’m still happy with my performance. I really enjoyed myself here at Two Oceans and I plan to come back next year – with more training I know I can do better.”

Given his incredible track record, Hendrick’s successful step up to ultra-marathoning should come as no surprise. He holds the SA records for 10 000m on the track (27:29.94) as well as 20km (57:46) and the half marathon (60:07), and he has the fastest time ever by a SA runner for 21.1km, having clocked 59:20 on an aided course in Lisbon in 2000. Hendrick has represented SA in four Olympics and at five World Athletics Championships, and he was twice runner-up in the World Half Marathon Champs (and also placed fourth), while also helping the SA team to two first place finishes as well as second and fourth.

However, it in is the marathon that Hendrick has enjoyed his greatest success. From a SA perspective, only Gert Thys (2:06:33) has gone faster than his 2:06:55, and Hendrick has wracked up a remarkable eight top-10 finishes in the London Marathon and six in the New York Marathon. That includes winning New York in 2004 and finishing second in 2005 and third in 2007, and coming home third in London in both 2005 and 2006. He also won the 2004 Mumbai Marathon and recorded top-10 positions in Paris, Chicago and Berlin!

Inevitably, Hendrick is now being asked if he will move up to the ultra’s permanently, but he says he reckons he still has at least three more years of hard racing left in his legs, so the marathon is still very much in his sights. He says he would like to run one of the major Big City Marathons later this year, but if he cannot gain entry into New York or Chicago, he may run the Cape Town Marathon in September, which would actually be his first standard marathon on home soil. “Then next year I want to run the marathon at the World Championships in China, and I want to go to the Rio Olympics in 2016. I think I still have the leg speed to be competitive, so the youngsters must watch out!”


In the women’s ultra, Nina Podnebesnova of Russia was first over the line in 3:40:07, having passed a fading Shitaye Gemechu Debellu of Ethiopia (3:43:37) in the closing kilometres. Elena Nurgalieva was third in 3:43:59, while fifth-placed Paulina Njeya was the first South African home in 3:50:48. The half marathon titles went to defending champion Stephen Mokoka in 1:04:16 (his third win) and Lebo Phalula in a PB 1:14:00. In the trail runs, the 22km titles went to Thabang Madiba and Landie Greyling, while the 10km titles were won by Tarisai Rukadza and Annamart Laubcher.

This year the ultra attracted a record entry of 11 348, up on last year’s 11 053, while the half marathon once again sold out its 16 000 entries as 4000 more runners were turned away, and runners from more than 80 countries travelled to Cape Town for what is known as the World’s Most Beautiful Marathon.